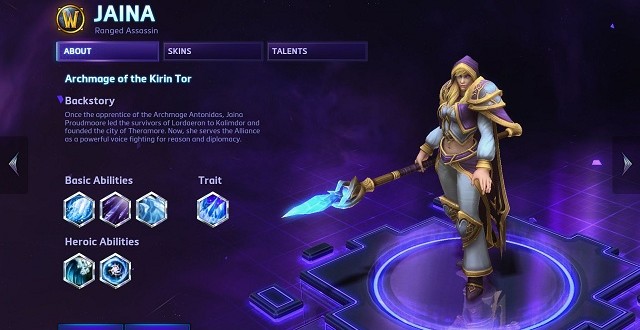 Miss Jaina Proudmoore was introduced today to Heroes of the Storm via a patch that also adds new skins, bug fixes, and various other changes to the game. Jaina was first announced back at Blizzcon 2014 along with a few other heroes that will join the lineup in the near future. You probably already know who she is if you’ve played World of Warcraft or Hearthstone before, although her Heroes of the Storm iteration most closely resembles the Warcraft 3 version. Miss Proudmoore is a sorceress with a knack for everything related to water and ice as suggested by her abilities. Her arsenal of spells include Frost Bolt, Blizzard, and Cone of Cold, all of which deal direct damage to one or multiple opponents while also adding a “Chilling” effect.

This effect is applied thanks to her Frost Bite trait which allows all her spells to slow down affected targets while also causing them to take increased damage while active. As for her Heroic abilities, Jaina players will get to choose between either Summon Water Elemental, or Ring of Frost. The former allows you to bring forth a powerful minion that fights by your side, while the latter creates a freezing ring that both roots and damages opponents. Aside from adding Jaina to the game, Blizzard has improved Heroes of the Storm by reworking some of the skins and improving the visual effects of various spells. The company also announced that Stimpacks will soon be coming to Heroes of the Storm. Stimpacks are items that will give players 100% XP and 150% Gold boosts for a limited amount of time once they are purchased from the in-game shop.

Also in the shop, you will find the new Winter Veil bundle, which includes Christmas themed skins for Jaina and Rehgar, as well as the new Reign-deer mount. Aside from all of this, Heroes of the Storm also underwent some other changes aimed at fixing bugs, balancing the gameplay, and improving the heroes. You can check out the full patch notes here.

I’m Load The Game’s co-founder and community manager, and whenever I’m not answering questions on social media platforms, I spend my time digging up the latest news and rumors and writing them up. That’s not to say I’m all work and no fun, not at all. If my spare time allows it, I like to engage in some good old fashioned online carnage. If it’s an MMO with swords and lots of PvP, I’m most likely in it. Oh, and if you’re looking to pick a fight in Tekken or Mortal Kombat, I’ll be more than happy to assist! Connect with me by email markjudge (@) loadthegame.com only
@@MarkJudgeLTG
Previous Fake Xbox Support Accounts Harassing Gamers
Next Destiny: Here’s the exclusive PS4 content coming with The Dark Below

In a coming patch Heroes of the Storm will see a few changes to the ...