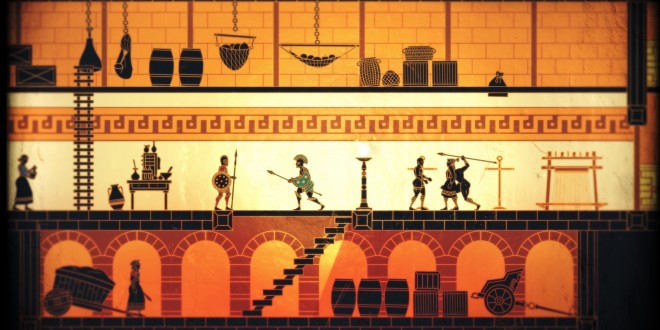 Apotheon attempts to bring forward an art style never used before in gaming, that of ancient greek pottery. And what better genre to utilize than the sidescrolling adventure style of Metroid and Castlevania. Apotheon cannot be mistaken for anything more than a love of the art style used in Greek pottery making. Decorations on their containers of black silhouettes would depict pieces of literature and religion. If you have ever watched the Disney film Hercules you’ll understand what I’m talking about. This art style was mainly used from 620 to 480 BC and was overtaken by the red figure art style. Apotheon sticks to the black figure style in its art and continues the theme of ancient Greece in its soundtrack.

The plot also stays true to Greek mythology, drawing from the countless tales of gods and goddesses of Olympus messing with humanity and each other. However in Apotheon, the divine beings have began to abandon earth and instead take refuge in Olympus. You are tasked with saving the world by taking the gods powers to bring balance back to nature. The world map is open to explore, although you are blocked from progressing until you have finished certain tasks in the initial areas. As you progress you will move into Olympus and take on more fantastical beasts in combat. The gameplay is action-RPG styled, with ranged and melee options. You can equip a shield and aim the direction that you want to block in. Your sword can hit from above and below and you can hurl javelins across great distances. There is even a PvP mode for local matches against friends. Another unique feature is a Metal Gear Solid alert system where attacking guards in the hub city will cause all police forces to look for you with deadly intent. You can run away and hide until the alert dies down and then are free to roam around unhindered.

The source material allows for a ton of variety, as Greece was home to many poets, philosophers, writers and story tellers. The main focus in Apotheon is a modified “Twelve Labours” which made Hercules famous. You’ll encounter many gods and goddesses along the way although unlike God of War you won’t be massacring everything you see. One of the best portions of gameplay I saw was the labyrinth, which was this gigantic maze constantly revolving, requiring timing and a constant eye on the map to make it out. The labyrinth is home to three separate objectives, meaning you’ll be spending much time attempting to solve its path layout.

Apotheon is being developed by Alientrap games and is set to release on PlayStation 4 in January of 2015.