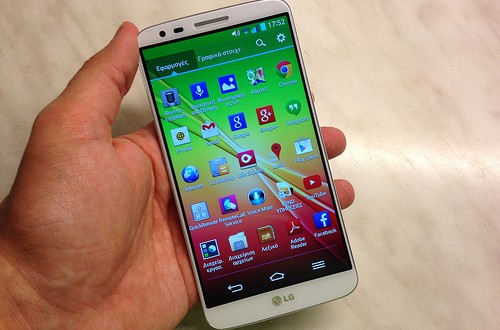 The LG G2 is last year’s flagship smartphone from LG and even though the LG G3 is already ranking as one of the best smartphones of 2015, its predecessor is nothing to frown at, boasting pretty good specs that can hold their ground even today. Nonetheless, an Android 5.0 Lollipop update would make the LG G2 an even more pleasant budget acquisition, since the new mobile OS from Google brings a ton of new features, not to mention the revered Material Design.

While LG did confirm that the LG G2 would be getting Android 5.0 Lollipop in no time, we haven’t seen any materialization of that promise, even though the update is already rolling out to the LG G3. Nonetheless, a screenshot emerged showing off the Lollipop treatment on an LG G2 smartphone. Seeing Optimus and Lollipop running on 2013’s LG flagship just keeps us calm knowing that proud owners of the handset won’t be left out by Google.

Even though we don’t have an exact release date for the LG G2 Android 5.0 Lollipop update, we can safely assume that if it’s not out by the end of the year, we will surely see the OTA rolling out in January 2015. The LG G2 is a respected flagship because of a great display, thin bezels, a pretty powerful battery and hardware and optical image stabilization, which always comes in handy on a smartphone camera. With Android Lollipop, the flagship can become just as modern and note-worthy as its successor and makes for great competition against cheaper phones being released nowadays. You can get your hands on an LG G2 for around $400, which is a great price considering the still high-end specs the device is touting. If you’re not familiar with the handset, you should know that the LG G2 has a 5.2 inch display with a 1080*1920 resolution, Snapdragon 800 CPU, 2 GB RAM, 13 MP rear camera and a beefy 300 mAH battery pack. If that’s not an impressive setup for $400, I don’t know what is (the OnePlus One comes to mind).

My life-long dream has been to test out every gadget on the market! Considering the fact that I've rapidly destroyed almost every gadget I've had so far, I'm not inclined to owning something, so my ideal outcome would be to have a different gadget each month. I'm really into smartphones, wearables and tablets and I love Playstation and Xbox, I'm sure I'll beat you at your own game (after a month of training... or two)
Previous Asus ZenFone coming to CES 2015 with dual cameras
Next Witcher 2, D4, MX vs ATV are the free Games with Gold in January