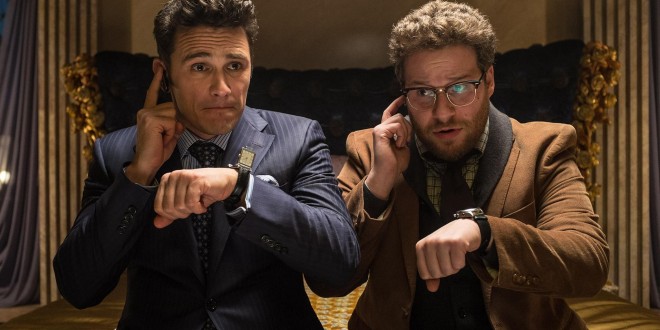 The Interview will stream online starting this morning according to various reports online. Sony famously pulled the film from theaters earlier this month amidst the Sony Pictures hack and after movie theaters began to announce that they would not be showing the movie due to threats of violence from the cyber-hackers. President Barack Obama during the final press conference of the year was critical of Sony pulling the movie. After multiple rumors of the film being published online for streaming, we finally have confirmation that The Interview will stream online. The movie will be available starting today at 1pm Eastern Time on YouTube, Google Play, Xbox and Sony’s website Seetheinterview.com. However the film is missing from the PlayStation Network, Sony’s own storefront on their popular PlayStation systems. Further puzzlingly is that you can stream the movie on an Xbox device, Sony’s main rival. Additionally it was previously reported that the film would be shown across more than 200 independent theater sites. For comparison, major theater chains make up about 3,800 sites for movie goers to attend. The White House was happy with the decision of both the theater and online streaming. James Franco and Seth Rogen, the film’s stars, celebrated that The Interview will stream online on Twitter.

The Guardians of Peace were the hacker group responsible for the Sony hack which took place in late November. The FBI has claimed that North Korea is partially responsible for the hack. It appears that the hack itself was motivated by a desire to stop the distribution of The Interview, a film in which both Franco and Rogen are sent to assassinate current North Korea leader Kim Jong Un. The hack put over 47,000 social security numbers and employment files at risk. Sony was criticized for not having a proper network security set up, which reflects the PlayStation Network hack in April of 2011 where the Network was down for almost a month. Sony initially canceled the film’s release in movie theaters on December 18, but has now turned around on the decision and The Interview will stream online. So now you can enjoy viewing The Interview from the comfort of your home or at a theater near you, the full list of which you can find here.

Steve Jobs movie will feature Fassbender and Rogen as leads