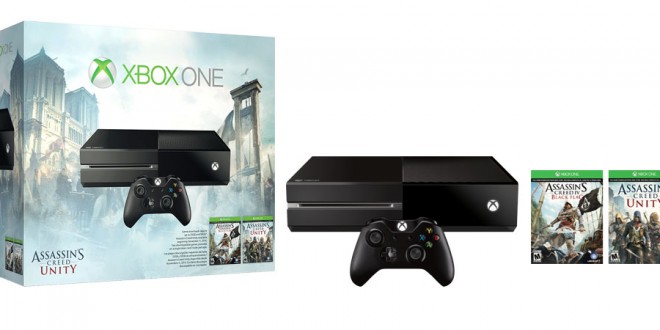 It’s not too late to grab a cheaper than usual Xbox One, but it soon will be. Microsoft’s highly successful promotion that helped them sell millions of consoles this Winter and Fall is slowly but surely coming to an end. Specifically, the limited time deal will only last until next Saturday, January 3rd. Although the Xbox One usually costs $400, during this time Microsoft is offering the console for just $350. In addition, there’s an better offer in the form of the Xbox One Assassin’s Creed Unity bundle, which is also available for 350 bucks. For that price you’ll naturally receive the console and a copy of Assassin’s Creed Unity to go with it, but you’ll also receive a copy of Assassin’s Creed IV: Black Flag to boot.

If that’s not enough stuff, you can also buy a bundle that includes all of the above plus the Kinect sensor, if you’re into that sort of thing. As you might imagine, this bundle is a bit more expensive and will cost you $450. Still a $50 discount though. Microsoft says that you can still find these Xbox One bundles on places like Amazon, Best Buy, GameStop, or Target where you’ll also get a free $50 gift card. Toys R Us also offers these bundles but you’ll get a free Xbox One controller instead of a gift card while Meijer prefers to throw in a free game of your choice for that price.

There’s yet another offer out there however and some might find it more appealing than the others. Newegg is offering a free 12-month subscription to Xbox Live Gold to anyone who purchases either the Xbox One Assassin’s Creed Unity bundle or the Kinect bundle. In addition, said customers will also receive a $20 Newegg gift card. This offer seems to be the best in many ways, but it ultimately all boils down to individual preference.

I’m Load The Game’s co-founder and community manager, and whenever I’m not answering questions on social media platforms, I spend my time digging up the latest news and rumors and writing them up. That’s not to say I’m all work and no fun, not at all. If my spare time allows it, I like to engage in some good old fashioned online carnage. If it’s an MMO with swords and lots of PvP, I’m most likely in it. Oh, and if you’re looking to pick a fight in Tekken or Mortal Kombat, I’ll be more than happy to assist! Connect with me by email markjudge (@) loadthegame.com only
@@MarkJudgeLTG
Previous Top 4 Xbox One Games of 2014
Next Top 4 PS4 Games of 2014