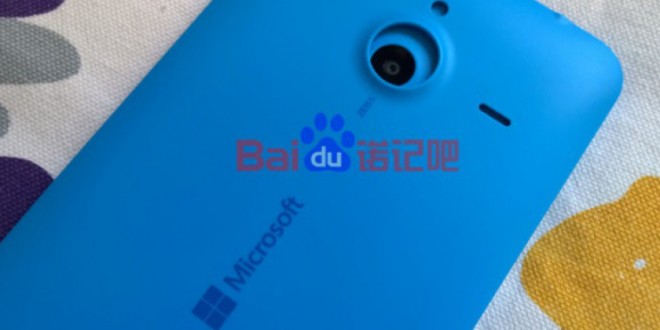 Rumors about the Microsoft Lumia 1330 have circulated for several weeks, but now we finally get to see some tangible evidence as well. The device in question is believed to be the sequel to the Nokia Lumia 1320, which came out about one year ago. Now it looks like Microsoft is preparing to launch the follow-up soon, with an official announcement believed to be inbound for CES 2015. Although we already heard about the specs and features on several occasions in the past, we weren’t able to catch a glimpse of the phone until now. Thankfully, the Microsoft Lumia 1330 was recently spotted in a leaked photo that allegedly shows the device in all of its glory.

As it’s usually the case with leaked images, we can’t be completely certain that this is the real thing so make sure to take this with a grain of salt for now. However, the smartphone does feature the Microsoft branding on the back, which suggests that we could in fact be looking at the actual handset. Moreover, the picture reveals that the Microsoft Lumia 1330 will feature a rather big camera on the back, just like all the rumors said it would. This is actually expected to be the main feature on the device and according to most sources, the PureView sensor will have no fewer than 14 MP, a pretty big upgrade compared to its predecessor’s 5 MP primary shooter.

While the leak doesn’t mention anything about specs, we already know what to expect thanks to some previous leaks. Specifically, the Microsoft Lumia 1330 is believed to come equipped with a 720p 5.7-inch display, Qualcomm Snapdragon 400 processor, 1 GB of RAM, and 32 GB of internal storage memory. The price tag will reportedly not be too crazy, but that was to be expected considering that this is a mid-range smartphone. As for the operating system, the Microsoft Lumia 1330 will reportedly run on Windows Phone 8.1. As mentioned, an official announcement might arrive at CES 2015, but if not, we’re pretty sure that Microsoft will make the big reveal at MWC 2015 in March.

I’m Load The Game’s co-founder and community manager, and whenever I’m not answering questions on social media platforms, I spend my time digging up the latest news and rumors and writing them up. That’s not to say I’m all work and no fun, not at all. If my spare time allows it, I like to engage in some good old fashioned online carnage. If it’s an MMO with swords and lots of PvP, I’m most likely in it. Oh, and if you’re looking to pick a fight in Tekken or Mortal Kombat, I’ll be more than happy to assist! Connect with me by email markjudge (@) loadthegame.com only
@@MarkJudgeLTG
Previous Apple Stylus with actual ink, marker, rubberized nub in the works
Next 64 GB Moto X Pure Edition now available for purchase for Stock Android lovers