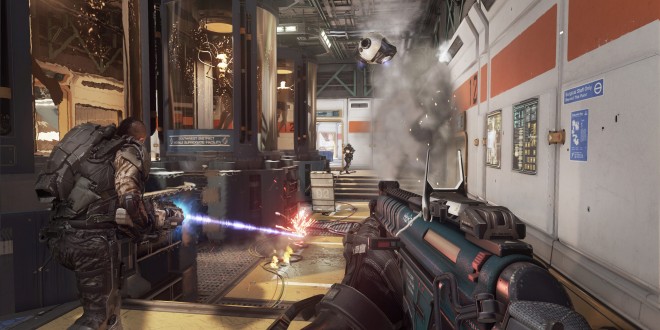 Despite receiving mixed criticism and high skepticism from fans all over the world, Activision’s flagship series, Call of Duty, still seems to be doing great financially. The Kevin Spacey voice-acted Advanced Warfare is in the top position in the UK Video Games chart for 2015, a chart that monitors sales and popularity across all platforms. While I haven’t considered myself a fan of the latest Call of Duty games, there’s no denying the financial pull the series has, and as with the last couple of years, Advanced Warfare is way up there in terms of sales and popularity.

Call of Duty: Advanced Warfare’s performance in charts is that much more commendable when we look at the solid competition it’s facing. The newly released PS4/Xbox One/PC version of Rockstar’s Grand Theft Auto V (or GTA 5 in short) has seen some very positive feedback from gamers and critics alike, yet it hasn’t been able to take down Advanced Warfare in the UK, ranking only in 2nd place. Close behind is EA’s popular soccer game FIFA 15, followed by Ubisoft’s Far Cry 4 and Assassin’s Creed: Unity. Unity, the 5th game in the Assassin’s Creed franchise, has seen a terrible launch, being riddled with game-crashing and immersion breaking bugs, something Ubisoft has been desperately trying to fix. This is reflected in sales and popularity, and as the charts show, the game is nowhere near doing as well as last year’s Black Flag did. Far Cry 4, another Ubisoft game and part of an important franchise as well, has as such taken over Unity in sales, at least as far as the UK is concerned.

Further down the list, we see other major titles from 2014, such as the Bungie-created multiplayer-focused FPS Destiny (ranked 7th) and yet another Ubisoft game, The Crew (ranked 6th). Despite holding the first place, Activision is still behind in sales if we consider that Ubisoft has 3 major titles in the top 10. However, the faith of Ubisoft fans has certainly been tested this year (with a somewhat disappointing Watchdogs and a definite letdown from Unity), and it will be interesting to see if this drop in the publisher’s popularity will be affecting its numbers in 2015. Here’s the complete top 20, as provided by the UK Video Games Chart of 2015:

Old-school gamer with a cheeky tongue that gets me in trouble. When I'm not playing games, I'm writing about them, preferably in the vicinity of a fridge! Oh, and if you're a Justin Bieber fan, I'm afraid we can't be friends!
Previous Nvidia Tegra X1 superchip: it will be making cars awesome
Next Nokia C1 leaked render shows off Android smartphone