Breaking News
Home » Tech » The Galaxy Grand Max was launched today, and all evidence points towards a generic Samsung mid-ranger

The Galaxy Grand Max was launched today, and all evidence points towards a generic Samsung mid-ranger

Samsung is on fire this week and has already launched two very anticipated phones, the Galaxy A7 and the Galaxy Grand Max, one in Malaysia and one in South Korea. The latter was announced today in South Korea and it seems like those living in the area can already get their hands on the device for a fairly acceptable price of $290 unlocked. That price makes us think about a fairly decent mid-range smartphone, so let’s see what the Galaxy Grand Max brings to the table.

The handset comes with a 5.25 inch display and a 720*1280 resolution, so we are expecting at least some decent processing power and cameras to be present in the build. According to the announcement, the Galaxy Grand Max runs on a 1.2 GHz quad core processor and we’re guessing that’s the Snapdragon 410 CPU, backed by 1.5 GB RAM and 16 GB internal storage expandable trough a microSD card. That setup isn’t really worth so much, since you can buy a better setup from LG, Motorola and HTC for $100 less. That means we should have at least some good cameras to work with. And we do, surprisingly. The new Samsung handset sports a 13 MP camera on the rear and a wide-angle 5 MP camera on the front, so we’re quite content with the offering. The whole shabang is powered by a 2500 mAh battery which should make for a decent battery life. We also get Cat 4 LTE, but the handset is particularly heavy, weighing 161 grams and is a bit bulky, too measuring 146*74.8*7.9 mm.

The Galaxy Grand Max is only available in South Korea at the moment, but we suppose it is going to migrate to international markets soon enough, although the company didn’t reveal any details about future availability just yet. We can also assume that the Android 4.4 KitKat OS that comes out of the box with the phone will be upgraded to Android 5.0 Lollipop in the future, since it’s a brand new Galaxy device that is compatible with Lollipop requirements. If you were hoping that the device has some nifty little features or a special design that would warrant your attention, you might be disappointed. Samsung isn’t known for innovation in design, and the Galaxy Grand Max stands proof of that. 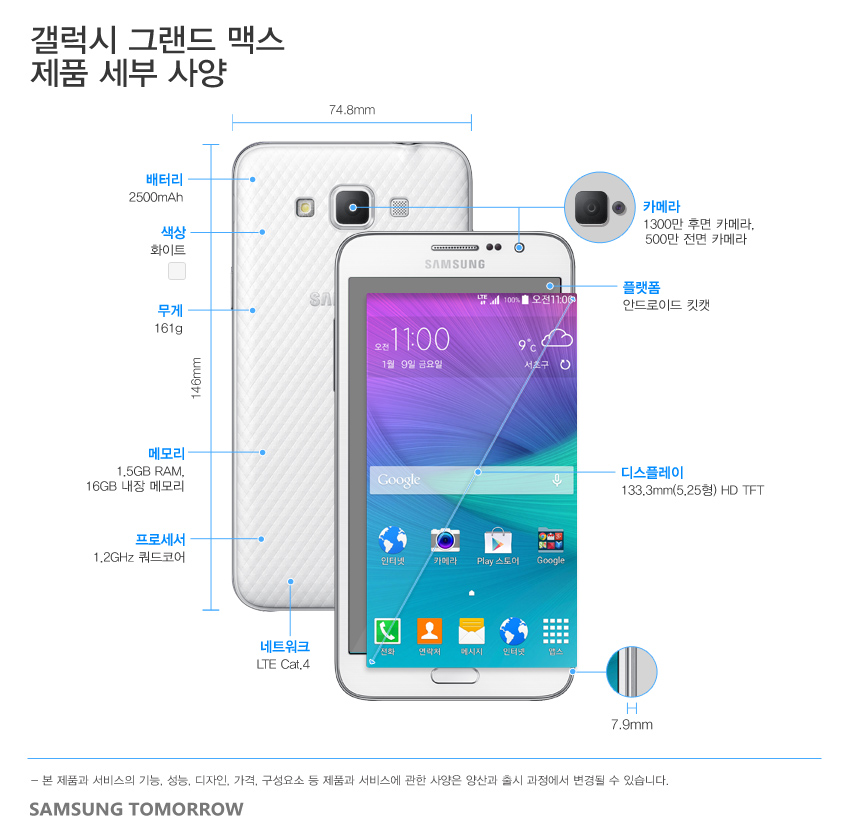 My life-long dream has been to test out every gadget on the market! Considering the fact that I've rapidly destroyed almost every gadget I've had so far, I'm not inclined to owning something, so my ideal outcome would be to have a different gadget each month. I'm really into smartphones, wearables and tablets and I love Playstation and Xbox, I'm sure I'll beat you at your own game (after a month of training... or two)
Previous Puzzle and Dragons Super Mario Bros Announced
Next Pre-Load Resident Evil HD Now