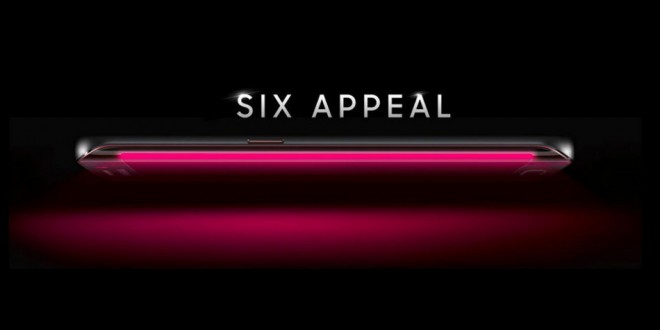 Samsung has revealed the Galaxy S6

The Samsung Galaxy S6 or more likely the edge-variant, the Galaxy S6 has been paraded around the internet on carrier websites ranging from T-Mobile to AT&T. All these carriers have managed to get their hands on an image of the Galaxy S6 from the side, which shows off a curved edge-display and a new button placement, not to mention a fingerprint sensor. The Galaxy S6 should be launched on March 1st, just ahead of the MWC 2015, at a dedicated Samsung Galaxy Unpacked event in Barcelona, Spain.

Everybody is hyping about the new device and rumors about it’s design are flying everywhere on the internet. One thing has already been made clear, though: carriers think the Galaxy S6 will be a massive success and most feel like the design is better than what we’ve seen on the iPhone 6 and iPhone 6 Plus, too. We are expecting a full-metal unibody to surface on both the S6 and the S6 Edge, but that will be to the detriment of the traditional removable battery.

Alas, Samsung wants to mend that by adding in wireless charging to the mix, as the company believes 2015 is the year of wireless. From the teaser images posted by U.S. carriers, we can clearly see the curved display of the Galaxy S6 Edge, which will reportedly measure 5.1 inches and have a QHD resolution of 1440*2560, in line with new trends. It seems the South Korean smartphone manufacturer will drop the Snapdragon 810 CPU from the list of specs within the phone, as Qualcomm confirmed a few weeks ago that it had lost a big partner for its chipsets. We’re not sure if they were talking about Samsung, but rumor has it that the “next Galaxy” phones will come with Exynos chips made by the company.

The tagline for the Galaxy S6 this year is “Six Appeal”, which is a but uninspired in my opinion. Nonetheless, the phone is shaping up to the best yet from the company, as many are saying they were impressed by the demo versions they have seen. The Galaxy S6 and its Edge variant will be the first full-metal phones from the company, so we ‘re curious about how thin Samsung actually managed to make their new flagship. We only have one week left until we find out, so stay tuned for the MWC 2015!

My life-long dream has been to test out every gadget on the market! Considering the fact that I've rapidly destroyed almost every gadget I've had so far, I'm not inclined to owning something, so my ideal outcome would be to have a different gadget each month. I'm really into smartphones, wearables and tablets and I love Playstation and Xbox, I'm sure I'll beat you at your own game (after a month of training... or two)
Previous New Final Fantasy Type-0 Screenshots Reveal Secret Movie, New Outfits
Next New Pebble smartwatch coming soon, still no third-party apps

Samsung logo dropped from Galaxy S6, but only on Japanese releases

The Galaxy S6 Active will be the next smartphone launch from Samsung and it will ...