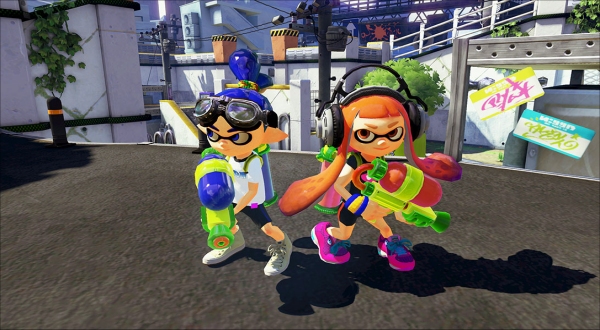 Splatoon is ready to launch for Wii U on May 29th. The game is expected to be the next big multiplayer experience on the console. Gamers have been anxiously waiting to get their hands on the paint shooter title. Nintendo isn’t holding back with Splatoon. In the last Nintendo direct, we received details on the new modes, ranked battles and battle dojo. Amiibo functionality will even give players new missions that will unlock weapons and gear. The latest issue of Edge magazine (via NeoGaf) is centered on Splatoon. The game’s directors Yusuke Amano and Tsubasa Sakaguchi shared their troubles and triumphs during the development cycle. The developers even shared new details that will definitely keep gamers excited.

During E3 2014, Nintendo dropped the first trailer for Splatoon. Nintendo’s newest IP is a third person shooter featuring squid humans as the main characters. During the prototype phase, the characters were basic blocks with an ink painting mechanic. As development continued, Amano and Sakaguchi added the ability for the characters to hide in ink and jump. However, the developers believed that a squid human character would be tough to sell to gamers. Back in 2013, Shigeru Miyamoto disapproved of the prototype. Miyamoto didn’t understand the game and saw no appeal to it. On January 6, 2014, Amano and Sakaguchi came up with the idea of switching between human and squid forms. From this idea, the developers thought of new ways to use the ink in the game. Characters could now swim faster in their own colored ink, but their movement would decrease if they swam in an opponent’s ink.

The developers of Splatoon want to create a title that will give gamers a one of a kind multiplayer experience. The game features ranked battles to test your skills with online players. However, the game will not feature voice chat during matches. Most Wii U titles lack the ability to communicate with other players during online matches. Director Yusuke Amano stated that Splatoon will never have voice chat. Amano is a fan of shooter games, but does not like the verbal negativity that comes with online matches. Amano believes that voice chat can add to the experience, but he wants Splatoon to attract new players.

Splatoon has a unique design and art style. A number of the developers are in their 30’s. The developers were therefore inspired by 90’s street fashion. Speaking of fashion, each amiibo will unlock five rare pieces of gear and fifteen single player challenges. The developers are also planning more online modes aside from Turf/Splat zones. As far as weapons, a primary weapon can come in variations. The developers stated the trick to balancing weapons is to give gamers a little more. Certain weapons will let you shoot faster, while other weapons will let you shoot farther. Splatoon is giving Nintendo a reason to be excited. Animal Crossing director Katsuya Eguchi praised the characters. Eguchi believes that the characters have the strong potential to appear in other games. You can try blasting foes out with ink when Splatoon launches exclusively on Wii U, May 29.