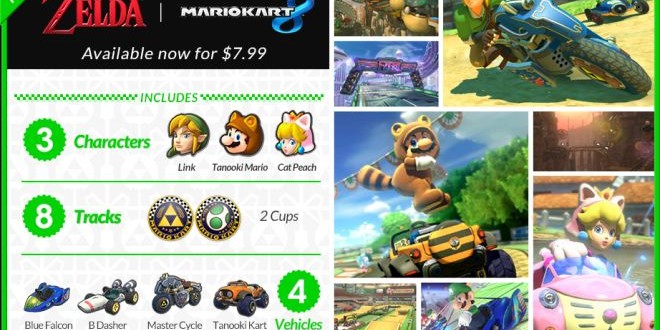 Hands On With the New Mario Kart 8 DLC

Mario Kart 8 got its second batch of downloadable content this week. A free update introducing expanded Amiibo compatibility and the 200cc engine class was released alongside a pack of eight new tracks and three new characters for $7.99 (or included with the first DLC pack in a $11.99 bundle).

We’ll start with what everybody will be getting: more Amiibo functionality and 200cc. Nine new Amiibo figures are now supported in Mario Kart 8, including Sonic and Mega Man. Touching one of the nineteen compatible Amiibo to the Wii U gamepad will unlock special racing suits for your Mii. While this is cool, it’s probably not the reason most people are updating – that reason is the new 200cc engine class, and it is absolutely insane.

To get the full effect of just how big of a change the addition of the 200cc class is, try playing a track on 50cc and then playing the same track on 200cc. The difference is drastic, and the new speed is dizzying. It brings new strategy to Mario Kart 8, putting more emphasis on braking and handling. The new engine class gives characters and vehicles with lower speed stats an edge where they were previously almost guaranteed to finish in the bottom half.

The free update alone gives even more replayability to the already fantastic Mario Kart 8. When replaying each cup in 200cc, the experience is completely different. Everyone who owns a copy of Mario Kart 8 should make it a priority to update as soon as possible and spend at least a bit of your weekend racing.

Now let’s talk about the paid DLC. Three new characters are included: the Animal Crossing Villager (both the male and female villagers are playable), Isabelle (your assistant in Animal Crossing: New Leaf), and Dry Bowser (basically Dry Bones but bigger and scarier). Dry Bowser is huge, and he plays just how you would expect – not too different from Bowser’s default form. Villager and Isabelle, however, make Mario Kart 8 undeniably cuter. Everything from their karts to their jumping animations is adorable and cleverly includes nods to the Animal Crossing series. All three of the new characters are a lot of fun to play with, but they’re not game changers the way that 200cc and the new tracks are.

Along with the new drivers, eight new courses are being introduced through the Crossing Cup and the Bell Cup. Obviously, the theme of this DLC pack is Animal Crossing, but you don’t have to be an Animal Crossing fan to enjoy the new tracks.

Four of the tracks are remastered versions of tracks from past games: Neo Bowser City (3DS), Baby Park (GCN), Cheese Land (GBA), and Ribbon Road (GBA) all make their return in glorious HD. Each remastered track is gorgeous, and they work perfectly with the new 200cc engine class. Playing Baby Park on 200cc is absolutely insane – playing through that track with three friends is a totally fun and crazy way to make your friendships a bit more hostile – many insults will be thrown around by the end of the seven blisteringly fast laps. Cheese Land is just as great as the title implies, Ribbon Road is adorable, and Neo Bowser City looks great in 1080p.

The new tracks are Wild Woods, Animal Crossing, Super Bell Subway, and Big Blue. Wild Woods is absolutely gorgeous, with detailed trees and beautiful water elements. It also features one of the coolest jumping transitions in the game – a dizzying rotation towards the end of the track. Super Bell Subway is a speedy, modern run involving a subway train that players can jump on and off of. Big Blue is an incredibly detailed nod to the F-Zero series, and it’s one of the most interesting tracks that the new DLC brings. However, the most interesting new track is Animal Crossing. Each time you play the track, the game will randomly select one of four seasons, and the seasons drastically change the appearance of the track. In the same way that Hyrule Circuit swapped out coins for rupees, Animal Crossing keeps the coin appearance but the screen will keep track of them as bells, the currency in Animal Crossing. While a normal track might just have bananas to make driving difficult, Animal Crossing includes different types of fruit, another nod to the series. You won’t just be slipping on bananas – you’ll probably slip on an orange at one point as well.

All in all, the new update to Mario Kart 8 has solidified the game’s position as the definitive Mario Kart experience. With all the DLC installed, Mario Kart 8 boasts 48 tracks, 35 drivers (not including the Mii option), four game modes, five engine classes, the Mario Kart TV app, and online multiplayer. Nintendo has done a great job of making these DLC packs feel not just supplementary but essential. If you’re not already playing Mario Kart 8, there has never been a better time to jump in. Even if you’ve already spent dozens of hours racing, the new DLC pack and update will have you revving your engines once again, ready to spend dozens more in Mario Kart 8‘s beautiful world.

I'm Aria! When I'm not doing other things, I'm either playing video games or writing about them. If you like games, anime, and random stuff, you can follow me on Twitter @Sage0fForest
@@Sage0fForest
Previous Galacide Release Date Announced
Next Mass Effect 4 Details Leaked