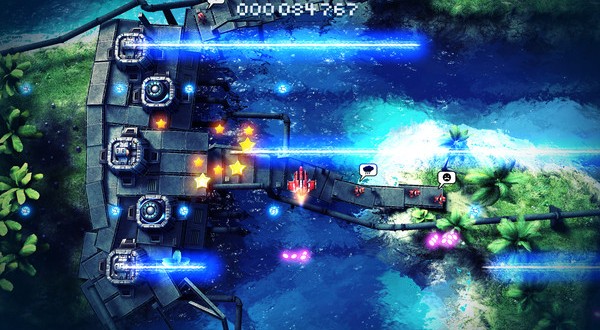 Sky Force Anniversary is a game that I first discovered on my phone. I was looking for something new to play, and I came across what looked like a fairly interesting shoot ’em up. What I found was not only a really solid addition to the genre, but one of the best games that I had played on my mobile device as well. Sky Force Anniversary was definitely a success on mobile, but how does it translate to the PC?

The first thing I really liked about the PC port of Sky Force Anniversary was the fact that they actually took the time to add proper resolution options. Not many ports from mobile do such a thing, so it was refreshing to see that they had at least covered the basics of PC game design. Other than the resolution options, the menu is fairly bare, but with a graphically simple game I don’t expect to see that many options, although I would definitely like to. 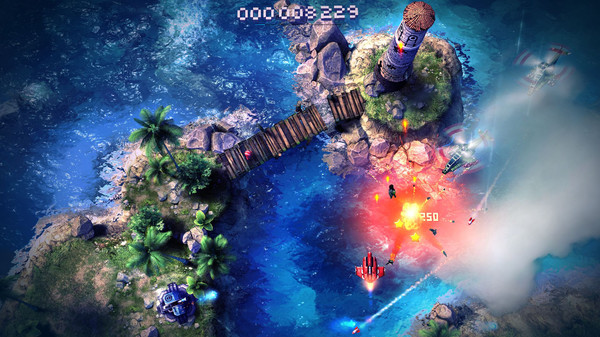 In terms of its gameplay, Sky Force definitely exceeded my expectations. I found a fantastic shoot ’em up that kept me hooked for a good number of hours. After playing the first couple of levels, I found the game to be extremely addicting, and definitely felt a bit of sadness when I finally had to put the controller down. I’m not normally a fan of the genre, but I’m definitely okay with finding myself enjoying a game that I never thought I would. The controls are very solid and tight, and I always felt like I was in complete control of my vehicle at all times. I played with a gamepad, of course, as this is a genre that pretty much calls for a pad in every situation.

Sky Force Anniversary has some really pleasant visuals, and the levels vary nicely to keep the game feeling fresh and interesting. However, in a game where your main focus is on dodging projectiles, the environment unfortunately is a bit lost. I found myself barely noticing the beautiful artwork that was in the backgrounds, or even the designs of the various enemy ships, as I was always focused completely on making sure I didn’t get hit. On top of the gorgeous visuals, Sky Force has an amazing soundtrack, which you can download for free off of their Steam page. The music in a shoot ’em up is the most important part. Not only does it help set the pace for the action, but in difficult games it helps to prevent the player from becoming frustrated after having to repeat the same levels over and over until they succeed. Sky Force had the type of soundtrack that I could find myself listening to in the car on a long drive. The upbeat style of the music really helped to set the pace for the game, and I feel that it is one of the strongest aspects of the game. 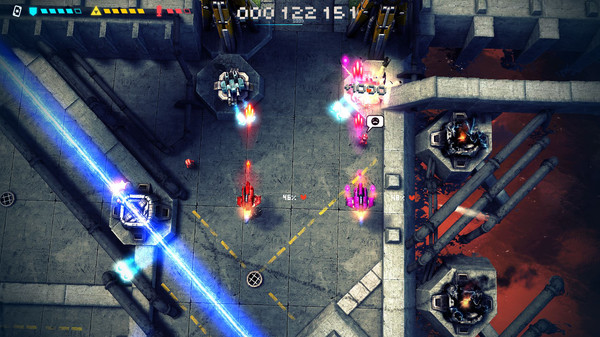 Upgrade systems are often artificial and shallow when it comes to this genre. However, Sky Force manages to allow you to upgrade many different aspects of your ship, including health and gun power, as well as allowing the purchase of additional guns. These upgrades are powered by stars, which you collect from various enemies. At the end of each level, your stars are counted and you are allowed to return to the upgrade screen to increase the stats of your ship. I found the upgrades to be very noticeable, which is something that I always struggle with in games. It is often the case that upgrades don’t feel like they do all that much, but in Sky Force, I really felt the impact of each and every upgrade.

To be frank, Sky Force is a very simple game. The shoot ’em up formula is pretty much followed exactly as it was written. There is not much innovation in the game, nor are there any ideas that I’ve never seen before. However, I would be lying if I said that Sky Force Anniversary wasn’t one of the best games in the genre that I’ve ever played. It is a game that I see myself going back to again and again, not only to finish it completely, but also to beat my high scores on other levels. Also, the addition of local co-op means that I’ll be returning to it with a partner to see how that works out. Between the level variety, upgrades, and addition of co-op, Sky Force Anniversary is a solid choice for any fans of the genre. It is currently available on Steam for $8.99, and I definitely recommend it to anyone looking for a bit of arcade action.

I enjoy playing pretty much any type of game out there. My passion lies in finding the gems of the indie gaming world. When I'm not playing games, I'm programming them, at the gym, or tending to my small army of cats. Writing has always been a part of my life and I'm grateful for the opportunity to get my content out there for people to see.
@spf0227
Previous PT Is Being Sold On eBay
Next Steam Greenlight Spotlight: Super Star Path