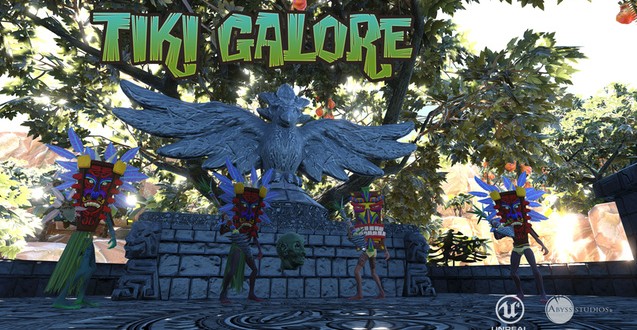 Today’s Greenlight Spotlight is on Tiki Galore. Tiki Galore is an online multiplayer arena in which players control a Tiki Warrior with an unusual thirst to dominate his or her opponents. Battle your friends in free-for-all or team battles which take place in various immersive tropical levels. To be honest, the reason I chose to spotlight the game was because I really enjoy the aesthetic. It reminds me of the days playing Tak and the Power of Juju, or even Crash Bandicoot, and this nostalgia definitely adds to the charm of Tiki Galore.

The currently finished level that the game boasts is known as Tiki Island. This level is a tropical island that contains a slew of ancient and mysterious temples. Surrounding the temples are dangerous shark-infested bodies of water, which take on the role of traps that can kill the player if they are not too careful. Speaking of traps, there are currently four traps that players can place to cause damage to their enemies. The spike pit collapses when an enemy runs over it, and causes them to fall into the pit of spikes. The shark trap, when walked over, produces a shark that pops out of the ground, causing massive damage to enemies. The tangle trap hangs an unfortunate Tiki who gets too close by their feet, which leaves them extremely vulnerable to being attacked. Finally, the springboard trap launches anyone who steps on it far out into the ocean. 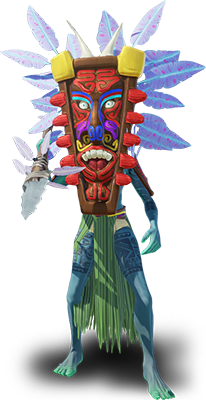 On top of having various traps to place, there are also a large number of environmental factors in play in Tiki Galore. Some examples of interactive elements of the environment are bridges that can be broken and logs that can swing, knocking any Tikis in their path high into the sky. These triggers will do well to add some flavor to the levels, and will mean that players must not only watch out for their enemies, but keep an eye on the environment as well. I can also picture the more advanced players leading their opponents into areas that contain these triggers and causing massive damage.

Finally, Tiki Galore features a great amount of character customization. From the mask, to the weapons, to skin color, to tattoos, almost ever aspect of your Tiki can be customized. It’s not stated whether or not these cosmetic items will be unlocked through gameplay, or if they are all available from the start, but I would love to see a sense of progression in the game. If we had the ability to unlock items through play, it would definitely go a long way in keeping players interested in the game and making sure the community doesn’t die out over time.

Tiki Galore looks like an extremely entertaining game to play with friends, and the ability to customize your own Tiki sounds like a lot of fun. If you’re interested, you can find it on Steam Greenlight, where you can leave a vote and some constructive feedback to help improve the game. Since the game is currently in Pre-Alpha, we can expect much more content and many changes in the future, so you never know, your feedback may be implemented into the game.

I enjoy playing pretty much any type of game out there. My passion lies in finding the gems of the indie gaming world. When I'm not playing games, I'm programming them, at the gym, or tending to my small army of cats. Writing has always been a part of my life and I'm grateful for the opportunity to get my content out there for people to see.
@spf0227
Previous Steam Greenlight Spotlight: Formula Fusion
Next Brilliant Action-RPG Umbra Launches Kickstarter