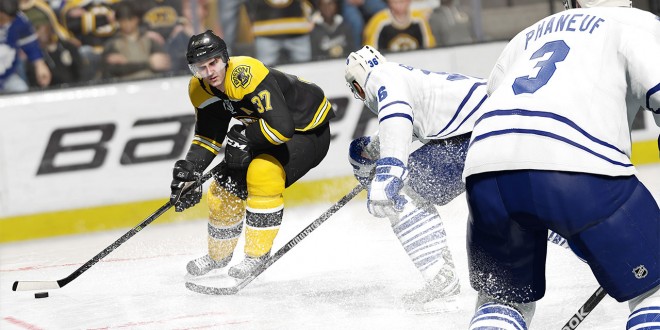 EA’s NHL games have been a bit of a mixed bag over the past couple of iterations. I’m looking at you NHL 15. A quick look at Metacritic and you can see how poorly the game went over with players. So, it makes sense that EA would want to fix some of their problems for NHL 16. And it seems as if they’re at least trying to listen their fans. The EA blog states that to make NHL 16 they asked their biggest fans to be a part of the development process and have spent “more time listening and working with them than ever before.” Whether the new changes actually live up to this remains to be seen; however, it is a step in the right direction.

Hockey Ultimate Team is now available in single player offline seasons for NHL 16. Be a GM will allow you to go through the day to day duties of managing a team, but they’ve added the addition of managing individual player morale throughout the season. This could be great, or painfully annoying, depending on how it’s tweaked. Be a Pro’s progression system has been changed. Sim to your next shift returns and you will be able to progress your player from the rookie leagues all the way to the pros. But now, you’re character will develop based upon your actions on the ice so you’re player should become an extension of how you play.

EA Sports Hockey League is back, after its disappearance from NHL 15. Their progression system has also been dropped in lieu of a class system in response to fan feedback. I’m sure many will be excited to hear this, EASHL’s disappearance helped in giving last year’s game a bad rep. Online multiplayer has also been tweaked allowing 6 vs. 6 gameplay. No more will players be restricted to having an AI goalie for their matches. There is also the inclusion of online co-op allowing up to four people to play from one console online against other similar groups.

In addition to these changes to NHL 16, there are various gameplay tweaks, story-driven commentary, and even mascots. But as long players are given the modes they want, and gameplay that feels good, I doubt fans will be all that bothered about the inclusion of mascots or narrative commentary – or even the new playoff beards. These little tweaks to atmosphere typically don’t make or break a game. It seems as though EA has responded to fan feedback, what do you think? Will you be giving NHL 16 a go this September on Xbox One or PS4?

Hi I'm Daniel and I'm an aspiring writer, avid gamer, and wanna-be cook; I'm not quite certain in which order. I like all things RPG and if that means swords n' spells, all the better. But, provided it has a good story I'll probably want to try it regardless of what it is. I'm a Windows junkie, and I spend my time gaming on Xbox, PC, and my 2DS.
@@danielcooper179
Previous Nintendo reveals its plans for the Mobile Market
Next Kickstarter PvP MMO – Das Tal