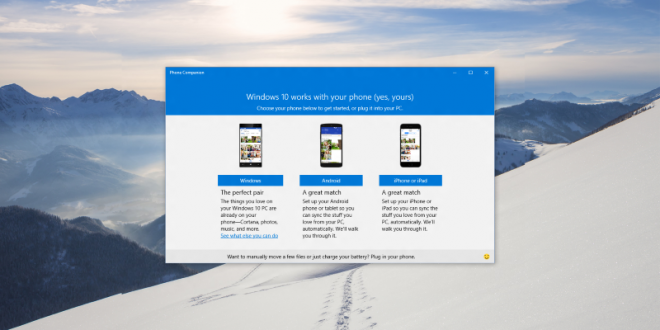 Windows 10 Interconnectivity For Your Devices – Even iOS and Android

If you’re planning on getting your hands on the free update to Windows 10 coming out later this year; then you’re probably aware that the new OS plans to increase interactivity between your various Windows devices by using one uniform system. This even includes your Xbox and the changes will provide various new ways that we can use the console whether gaming at home with a friend or online. With the implementation of Window’s OneDrive, Microsoft has slowly been encouraging and showing people that anything they work on can actually travel with them. If you type up an idea into your Windows phone while out and about, you can access it on your computer when you get home. But, not everyone uses a Windows phone and Microsoft is now acknowledging this.

Many users don’t use the same brand of device for all of their equipment, and because of this “a real challenge people face is figuring out how to make everything work together.” So, it was announced today on the Windows Blog that Windows 10 will be shipping with a built in companion phone app. The new app will allow users of iPhone and Android to be able to access a similar seamless experience between their Windows PC and their phone. The app will ask you what device you use and then tell you what you would need to install on your phone in order to allow your content to sync with your PC.

This new push onto other devices also comes with a Cortana companion app. Should you wish to do so you can download Microsoft’s Cortana onto your iPhone or Android. The Cortana app will function as a companion to the one that is built into the Windows 10 OS and Microsoft Edge. It won’t have all of the same functionality, but it will still work as a personal assistant. I can’t imagine the Cortana assistant being all that popular on other devices; it will have to compete with Siri and any of Android’s equivalents. With some of Cortana’s functions removed, I doubt it will be able to compete. But, the added interactivity with your content will be nice should you need it.

To sum up, Windows 10’s new companion app will allow you to sync your photos, music from your cloud, and documents between your PC and phone – regardless of what phone you use. It will also provide you with a personal assistant should you wish to try Cortana out. All of this will be arriving with the Windows 10 release sometime this summer.

Hi I'm Daniel and I'm an aspiring writer, avid gamer, and wanna-be cook; I'm not quite certain in which order. I like all things RPG and if that means swords n' spells, all the better. But, provided it has a good story I'll probably want to try it regardless of what it is. I'm a Windows junkie, and I spend my time gaming on Xbox, PC, and my 2DS.
@@danielcooper179
Previous Digital Board Game Armello Coming To PS4
Next Puzzle & Dragons Z + Puzzle & Dragons: Super Mario Bros. Edition Review