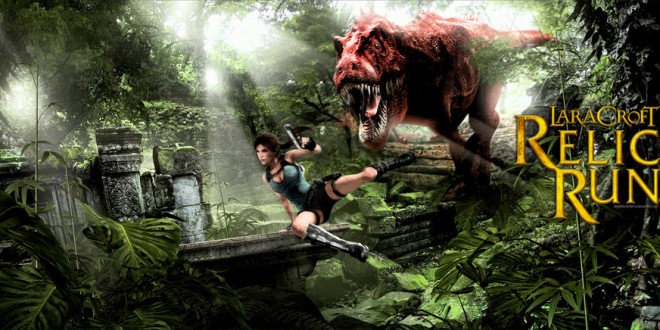 The Windows Phone app ecosystem often, and with reason, receives criticism. The Windows Phone app selection isn’t as great as iOS or Android, and many of the WP’s titles come no where close to parity with its competition. It’s one of the biggest things holding Windows Phones back. If you’ve ever played something like Infinity Blade on iOS, WP apps definitely have some catching up to do if they hope to compete. With that said, the WP app ecosystem has improved over the past couple of years and we are starting to see some better quality apps appearing that hope to compete with the competition.

Lara Croft: Relic Run was developed by Square Enix Ltd. and was released on May 25th for iOS, Android, and Windows Phone. My review for the game was carried out on a Nokia Lumia 930, the non-US equivalent of the Lumia Icon. So, keep in mind that any issues with jumpiness or phone temperature may only be an issue with the device I was using. And it did have a tendency to heat up will prolonged sessions of play.

Lara Croft: Relic Run is Square Enix’s attempt at a Temple Run type game. You play as Lara Croft on the search for her missing friend Carter Bell from Temple of Osiris; to do so Lara must run madly through various regions to collect clues, in the form of relics, in order to find him. Each relic has a little description and collecting them progresses the game. Relic Run also has you running and collecting coins and diamonds, as well as map pieces and boons. With enough map fragments you unlock a relic which you must then grab during your run. The coins let you buy various upgrades like med-kits, or weapon upgrades; all of which help you get further on your next run. Diamonds are the other currency; they can be picked up in-game, but at a much slower rate. They are needed to buy ankhs, for reviving during a run, or for purchasing character skins. Finally, you are also able to purchase curses that allow you to penalize a friend who also plays the game. You can also spend actual money in the game to purchase these upgrades quicker, but you can unlock everything for free.

If you’ve ever played Temple Run, then Lara Croft: Relic Run will be rather familiar for you; however the developers tried to shake things up and they succeeded in making the game a little more interesting. Instead of simply dodging by swiping to dodge, jump, or duck you can do various parkour moves. The first flip animation over a fallen pillar was neat and it’s nice to see that the developers have tried to go the extra step with their game. But Relic Run also tries to throw more at you. In the first region alone, the game will have you wall running, driving an ATV, running through shooting sequences, abseiling, running away from a T-rex, and they even throw in short animated sequences beyond slow motion parkour. It all comes together to make a fun free-running experience.

The added segments add to the game experience. They really do make Relic Run stand out from other endless runners and provide enough variety that the game has still yet to feel repetitive. The ATV segment was neat, but I found it to be rather jumpy on my phone, and is perhaps the worst part of the game. Other than that, the shooting sequences break up the typical running formula and add a bit more depth to the game. You also have to upgrade your health and weapons to survive these segments, and they tie in to the Tomb Raider series nicely with the iconic dual wielding pistols. The abseiling segments were my favourite addition, the typical running formula is flipped and you then dodge up and down and jump away from the wall to your right. Almost immediately after getting the hang of the controls, Relic Run changes the rules. It’s just enough of a switch that it keeps you on your toes and prevents you from running on autopilot swiping left and right; it forces you to fight against muscle memory and consciously makes you think about the directions.

Its great to have cinematic little sequences and slow-motion visuals for the parkour effects; but the almost constantly moving camera makes it really difficult to see what’s coming next. The most notorious place for this was when I came up against the first T-rex; try dodging things on the path while the camera pans off into the distance at the side of the track so you can shoot at the creature. If you manage to damage the T-rex enough the camera pans back to the path, but the obstacles are almost right in front of you. It could be a part of the challenge, but it’s quite difficult to dodge something that you can’t see. Although, there were other occasions where the camera failed me. If the path gently curves to the left, the camera often hangs over Lara’s left shoulder, making it harder to spot around the corner. I had the same issue in an ATV segment where the panning camera threw me off to the point I wasn’t sure which lane the incoming obstacle was in. With that said, the camera wasn’t enough of an issue for the game to make it a deal breaker for me; it may just be the cost for having the extra slow motion visuals and animations, which makes Relic Run stand out among other endless running type games.

To conclude, Lara Croft: Relic Run is a fun little addition for any phone, and considering that it’s free there’s nothing but yourself stopping you from trying it. Square Enix Ltd. have created their own unique take on the endless runner type game and thrown in enough additions to make the game stand out. With that said, it does have a few issues. The non-fixed camera is a double edged sword; it provides awesome slow-motion animation, but it also makes navigating occasionally problematic. The vast amounts of foliage on the running track also hinder navigation when trying to spot upcoming obstacles. Lara Croft: Relic Run will serve as a fun addition for anyone looking to add to their phone’s game library.

Square Enix Ltd. have created their own unique take on the endless runner type game and thrown in enough additions to make the game standout.

Hi I'm Daniel and I'm an aspiring writer, avid gamer, and wanna-be cook; I'm not quite certain in which order. I like all things RPG and if that means swords n' spells, all the better. But, provided it has a good story I'll probably want to try it regardless of what it is. I'm a Windows junkie, and I spend my time gaming on Xbox, PC, and my 2DS.
@@danielcooper179
Previous Windows 10 Release Date Revealed
Next Microsoft Has Purchased The Company Behind The Wunderlist App

Everyone has been talking about the huge make-over Lara Croft would be getting on the ...