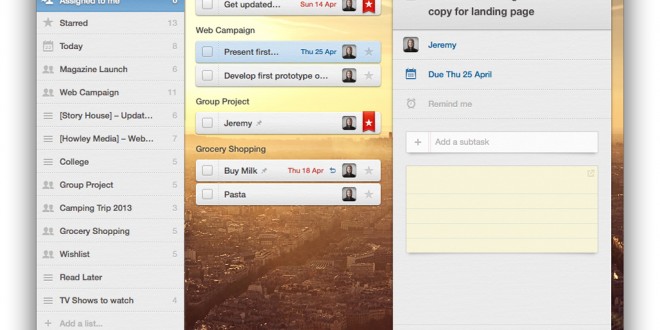 Microsoft Has Purchased The Company Behind The Wunderlist App

6Wunderkinder, the developers of Wunderlist, have announced today that they will be joining Microsoft in the tech giants most recent acquisition. If you’re unfamiliar with Wunderlist it is a productivity app that allows you to make and share lists across devices and with multiple people. The app was rated as the best to-do-list app last year by The Verge; needless to say, the app is quite popular with over 13 million users and more than 1 billion to-do-lists made.

The purchase follows after Microsoft’s other ventures into productivity acquisitions; both Sunrise and Acompli, now seen as Outlook, were also integrated into Microsoft. The Microsoft Blog says that, “the addition of Wunderlist to the Microsoft product portfolio fits squarely with our ambition to reinvent productivity for a mobile-first, cloud-first world.” This is intended to demonstrate “Microsoft’s commitment to delivering market leading mobile apps across the platforms and devices [their] customers use – for mail, calendaring, messaging, notes and now tasks.” It seems that with Windows 10 now confirmed to be on the way to consumers before August, Microsoft is doing everything they can to further their systems’ productivity capabilities. After all they are hoping to make their new OS appeal to both businesses and consumers by integrating productivity apps, as well as PC and Xbox consoles. Integration in this way is Microsoft’s attempt to promote a switch to Windows 10 in the hope that they will achieve their 1 billion user goal.

With Wunderlist becoming one of Microsoft’s many possessions some may be worried about changes to come. Microsoft has shown in the past that they will make changes as suits them, such as with Acompli. But, for now, you can rest at ease; Microsoft has confirmed that there will be no price changes for either of the free or paid versions. Nor will Microsoft make any changes to the host of devices that Wunderlist currently supports. However, this was all that they confirmed and we may eventually see the app integrated, or re-branded, into another Windows product. I could see how Wunderlist would pair very nicely with Cortana, but we won’t know what’s in store for the app for awhile. Microsoft has said that they will announce what they have planned for the apps future in the coming months.

Hi I'm Daniel and I'm an aspiring writer, avid gamer, and wanna-be cook; I'm not quite certain in which order. I like all things RPG and if that means swords n' spells, all the better. But, provided it has a good story I'll probably want to try it regardless of what it is. I'm a Windows junkie, and I spend my time gaming on Xbox, PC, and my 2DS.
@@danielcooper179
Previous A Windows Phone App Review – Lara Croft: Relic Run
Next Dark Souls 3?