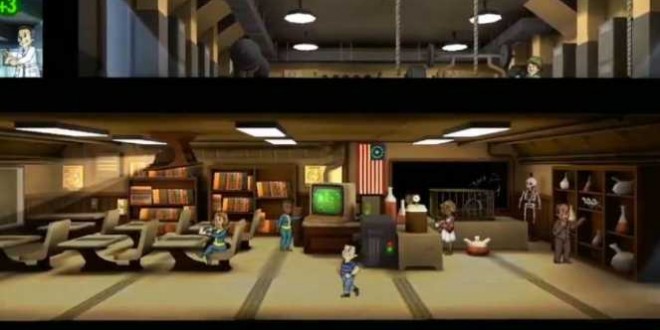 In the midst of Bethesda’s first E3 conference, among all the (well deserved) jabs at smartwatches and announcements of a real Pip-Boy for the collectors edition for Fallout 4 was the revealing of Fallout Shelter, yet another way that you can bring your love of Fallout with you wherever you go. Described by Todd Howard as a kind of a side project that the team wanted to work on that combined various elements from other games like the Sims and FTL, Fallout Shelter is a 2D game that essentially lets you be the Overseer of your own Vault (minus the secret, nefarious human experiments that the Vaults were known for) where you have to manage various resources to try and keep your Vault dwellers happy, or at least alive.

When you first start the game, you will notice that unlike the more recent Fallout games, Fallout Shelter opts for a cartoon-y art style. Furthermore, you cannot choose between a selection of classic blues or jazz, though the ambient music that is very reminiscent of elevator music suits the game rather well. In the game itself, you will have to not only manage the resource consumption of your Vault and expand it, you will also have to manage the well being of the Vault’s inhabitants and eventually send members out into the Wasteland to bring back some of the more exotic items available, whether it be simple armor pieces that provide stat boosts or lethal energy weapons that can be used to help your citizens fend off raiders and Radroaches.

In practice, this works rather well, especially for a mobile game. Your basic resources like energy, food, and water are displayed at the top of the screen while the more complex functions like keeping track of the people that you send out of the Vault can be easily accessed without too much fear of accidentally pressing something else on the screen. Managing the various inhabitants is fairly simple as well, as all you have to do is drag them over to a room that you want them to work in, or simply press them to get an overview of their stats and equipment. A layer of complexity is added for those who want to be as efficient as possible in that all of the essential resource producing rooms favor one stat over another. For example, the high agility characters will be able to help out the most in food related rooms while stronger characters can work more efficiently in the energy producing rooms. Of course, as the game progresses, you can expand your Vault to have various stat improving rooms like gyms and firing ranges.

Other things that have to be kept in mind are happiness and Vault population. As much of the more advanced rooms are unlocked via population, and population can be increased by sending a male and female inhabitant into the bedrooms, it is important to keep in mind that children will take up a significant amount of resources until they grow up. As a result, you dont want to overpopulate all at once unless you want to run the risk of running out of food and water. All in all, there is more to the game than simply telling your various Vault dwellers to make food and make water.

As advertised, the game is completely free, and the lunchboxes that can provide significant in game boosts can be obtained through completing simple in game objectives, so there really is no price tag attached to the game. The only reason to buy lunchboxes is to speed your game up considerably, as there is a lot of waiting involved, especially in the late game when it can take days for your citizens to find something good in the Wasteland and return.

While the game can run on devices running an older iOS, it will crash consistently unless every other program is closed, and even then there is a breaking point where nothing can be done other than to start a new game. This is especially true later on, when your Vault can reach dozens of inhabitants and subterranean levels. While the stability may be dependent on the device, and the auto save function is rather good, it is quite possible that at some point, the game will crash every single time you try and do something.

Conclusion- A new twist on the Fallout game series that lets you manage a Vault rather than escape from one. War apparently can change, contrary to the popular saying now associated with the Fallout series. Also, it’s free.

Really good when it works, but can suffer from some issues. A different, yet interesting take on the Fallout universe!