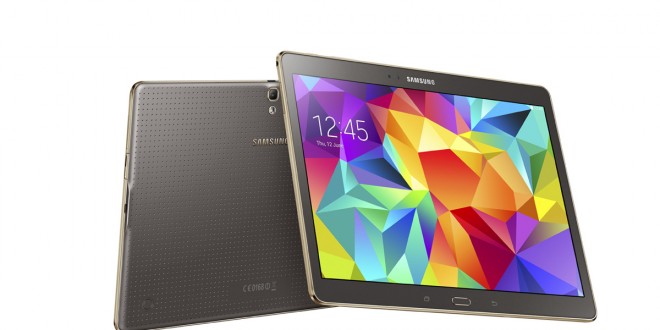 The Samsung Galaxy S was the high-end multimedia tablet of choice when it was released 2 years ago, and its successor is expected to arrive tomorrow (20th July) at a London event (if the good folks at TabletMonkeys are correct). However, the newest iteration in Samsung’s range are expected to be different from its predecessor.

Insterad of using a widescreen aspect ratio, as seen in all its previous tablets, Samsung will be using a 4:3 aspect ratio Super AMOLED display at 9.7″. Not only will its screen match the iPad Air 2’s in size, but it will also share the exact same resolution as its competitor – which sits at 2048 x 1536. This is lower than the Tab S’ current resolution, which is a notch higher at 2560 x 1600; though whether you’ll be able to notice the difference in pixel density is questionable. Also, the new form factor will undoubtedly make the new Tab more user-friendly in portrait mode and whilst browsing the web. It may also benefit from app migration and optimisations found in Apple’s App store.

Packed under its casing is an Exynos 7420 processor, the same as the one in the Galaxy S6, and also 3GB of RAM. A smaller version of the tablet will also be available, this time an 8″ slate, which shares the same specs as its big brother. These tablets will also be thin, really thin. At 5.4mm for the 9.7″ version, the Tab S2 will be the thinnest tablet of its size when it hits the market. For comparison, the iPad Air 2 is an already svelte 6.1mm.