Breaking News
Home » OPINION PIECES » What’s In Fallout 4’s Nuka-World DLC and is it worth it? 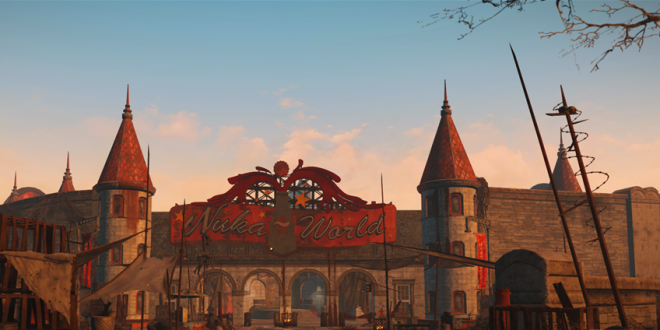 What’s In Fallout 4’s Nuka-World DLC and is it worth it?

One of the largest (and most valid) complaints about Fallout 4 is that the game didn’t really give you many opportunities to be evil. Sure, you could go around insulting people and killing somewhat indiscriminately, but your options were rather limited when compared to the things you could do in Fallout 3 and Fallout: New Vegas. With Fallout 4’s Nuka-World DLC however, this complaint is addressed in full force, giving you the chance to take control of three unique Raider gangs.

As you can probably expect, this is not a task that is easy or fast; Nuka-World’s main questline will take just under 10 hours to complete, and that is assuming that you are playing at the most optimal speed possible (i.e. no dying, minimal traveling and exploring). In the process of finishing the main questline, you will have to explore Nuka-World’s five unique theme parks, each of which have their own set of two to four attractions (although the questline mostly consists of just killing a lot of people/things, which can get a little repetitive).

Along the way, you will probably find around five new weapons (including the highly modifiable, AK-47 esque Handmade rifle), a countless number of new outfits and armor pieces (including at least two full sets of armor and clothing for each Raider gang), a number of new Automatron parts, a new radio station that is (obviously) entirely Raider themed, and some of the Fallout universe’s most interesting Nuka-Cola recipes. You will probably also notice the fact that there are also some new hairstyles, a new companion, no shortage of new animals, and many new side-quests and activities.

Of course, no Raider themed DLC is going to be complete without giving you a chance to lead your gang of ruffians across the Commonwealth to pillage, extort, and conquer settlements, even though it may seem rather odd given that you were the one who established the settlements to begin with. Unfortunately, this means that you will be backtracking across most of the locations that you already explored in Fallout 4’s main game, but at least it is an interesting gameplay mechanic that can be resolved with words or an excessive amounts of violence.

With a $20 price tag, Fallout 4’s Nuka-World DLC is somewhat expensive, but it does deliver at least half an hour of gameplay per dollar spent, which is very cost effective when compared with other DLCs or full games. Of course, you may or may not enjoy the content of the DLC itself, but that is a risk that is inherent with every game purchase. However, it would be remiss to not consider Nuka-World to be more of an expansion pack than a traditional DLC, which is rather appropriate given that Nuka-World is the last of Fallout 4’s DLCs.