ARK: Survival Evolved was announced today via a stunning announcement trailer from independent developer Studio Wildcard. Almost everybody has found themselves being completely fascinated by dinosaurs at some point, and the entertainment industry has a history of using this fascination to bring us exciting and satisfying experiences. From the delightful tension of Steven Spielberg’s Jurassic Park to the unrelenting action of Turok: Dinosaur Hunter, these prehistoric creatures have always been more than welcome in our imaginations.

Recently, though, dinosaurs haven’t been doing so well in the world of video games. The last Turok game was a title based on the Turok comic books in 2008. Compared to previous games in the series, it was a highly disappointing experience. 2005’s Peter Jackson’s King Kong had some cool dinosaur sequences, but it was hardly a dinosaur game. And, sure, the dinosaur-like creatures in Monster Hunter 4 Ultimate are great, but it has just been too long since we’ve had a dinosaur-focused game that is completely mind-blowing. Fortunately, though, if the announcement trailer for ARK: Survival Evolved is any indication, that might change fairly soon.

The trailer opens by stating that all of the footage is taken from genuine online gameplay. Instead of showing us dramatized and overproduced studio sequences, Studio Wildcard cuts right to what we care about the most: the game! It also lets us know that the game will include online multiplayer. The environment looks absolutely gorgeous, and it is reminiscent of something that you might find in a Far Cry title. The game is played from a first-person perspective, and it makes the action seem much more intense. The weapons are incredibly detailed, and the way that the character handles his or her equipment looks cool.

The game isn’t all about shooting, though. Towards the end of the trailer, we see that riding dinosaurs will be possible in ARK: Survival Evolved. The game will also focus on survival, as is implied by the trailer, the story set-up, and the game’s title. Players will wake up on the shore of a strange island – from there, you will have to craft, fight, hunt, farm, research, and work with others to survive and, hopefully, escape.

The trailer looks gorgeous, and ARK: Survival Evolved looks like it might be one of the most pleasantly surprising games of the year. The game will be coming soon to Xbox One, PS4, PC, Mac, and Linux. Early access will be available through Steam starting on June 2, 2015.

I’m Load The Game’s co-founder and community manager, and whenever I’m not answering questions on social media platforms, I spend my time digging up the latest news and rumors and writing them up. That’s not to say I’m all work and no fun, not at all. If my spare time allows it, I like to engage in some good old fashioned online carnage. If it’s an MMO with swords and lots of PvP, I’m most likely in it. Oh, and if you’re looking to pick a fight in Tekken or Mortal Kombat, I’ll be more than happy to assist! Connect with me by email markjudge (@) loadthegame.com only
@@MarkJudgeLTG
Previous Apple Watch vs Moto 360 – Battery Life
Next GTA 6 set in Portland? Some people certainly think so 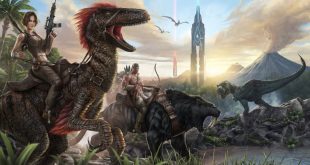 The Switch Version of Ark: Survival Evolved Has Been Updated

The top-down space-adventure-RPG called Landinar: Into the Void exited Early Access recently, with the full ...