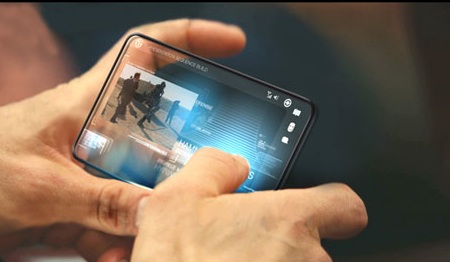 Graphene made in a kitchen blender leads to transparent devices

No doubt graphene was indeed a miracle material ever since a pair of chemists from Manchester University first manufactured it. They isolated thick layers of carbon by peeling off the sheets from the powdered graphite using sellotape. Earlyer this year Samsung achieved a breakthrough, developing a technique for synthesizing graphene on a large scale. The material of unusual strength and flexibility is more conductive to electrical charge and heat than silicon, managing to be stronger than steel while still remaining flexible. Its potential use as a bendable ultra-thin screen for wearable devices made it a very attractive material. It’s possible we’ll be seeing multiple mobile devices using a graphene-based display. Remember Tony Stark’s device in Iron Man 2? That might just become a possibility.

Until now the mass production of graphene has been retained by limitations when it came to producing a larger piece of material. But as the Dublin Trinity College scientists tried to industrialize the process of manufacturing this miracle material, they discovered they can use a kitchen blender to do this. As silly as this might sound, is completely true.  The scientists wanted to speed up the process, so they used graphite powder, water and  liquid detergent and mixed them up in a blender for a half an hour at high speed. The result was surprising: a black goop that contained flakes of graphene with large micrometer dimensions that remained suspender in the water.

Even if you have all the materials necessary to try this experiment at home, it would be quite impossible, because we don’t know exactly how much graphite (found in pencils) or how much detergent is required to make graphene, the process requires a lab-grade spectrometer, and separating la thin layer of material from the solution is not that easy.

“If you were to try this at home, you could use a household surfactant (dish-washing liquid). However, I’m not sure I’d want to make a smoothie in a blender that has just been filled with graphite”, said Jonathan Coleman, leader of the Trinity College scientists.

Unfortunately, this type of graphene is not as high quality as the one obtained from vapor atom by atom, but the fact that graphene can be so “easily” manufactured, is indeed a breakthrough. Perhaps using a kitchen blender doesn’t sound very professional, but using a 10,000 litre vat that could produce almost 100 grams of graphene per hour is definitely a huge step forward. Even if the resulted product is not as high quality as the traditional-made one, this method is faster and more practical compared to the other. Until now the production of graphene did not exceed 0.4 grams per hour.

“It is a significant step forward towards cheap and scalable mass production. The material is of a quality close to the best in the literature, but with production rates apparently hundreds of times higher” said Andrea Ferrari, an expert on graphene at the University of Cambridge.

If graphene would be produced in large quantities, the idea of transparent devices is also one step closer to reality. Apart from bendable devices, graphene can also be used for electronic components, like processors and memory chips. A research team from the Department of Electrical Engineering from the Korea University successfully used graphene to develop a transparent memory module, with enough storage capacity and resistance.

This transparent memory modules can be used in transparent electronic devices, including smartphones. The memory modules have been put through 100.000 tests and it’s been discovered that they can store information for at least 100.000 seconds at temperatures up to 85˚C. The team is very confident and sees this discovery as a springboard for future large storage capacity devices, and why not, fully functional transparent devices, like tablets or smartphones.

The market of manufacturing graphene is growing due to all the investors that support various companies. As graphene will be used to manufacture various devices from faster electronics to the incredible night vision contacts, we can say that the discovery of this miracle material was only the beginning of a new technological era.

I’m Load The Game’s co-founder and community manager, and whenever I’m not answering questions on social media platforms, I spend my time digging up the latest news and rumors and writing them up. That’s not to say I’m all work and no fun, not at all. If my spare time allows it, I like to engage in some good old fashioned online carnage. If it’s an MMO with swords and lots of PvP, I’m most likely in it. Oh, and if you’re looking to pick a fight in Tekken or Mortal Kombat, I’ll be more than happy to assist! Connect with me by email markjudge (@) loadthegame.com only
@@MarkJudgeLTG
Previous Dayz Devblog and Patch notes for stable revealed
Next Titanfall DLC: Expedition’s first map War Games revealed