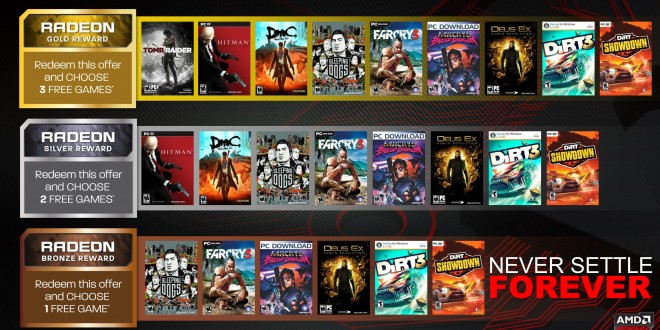 AMD announced the return of the Never Settle Forever campaign, promising to give gamers who buy Radeon cards up to three games or indie adds, depending on the type of GPU they chose. Buyers can also get a $10 off coupon and a free-to-play game FireFall. The first time AMD launched the Never Settle packs they included a bunch of popular titles and recently released games, like Tomb Raider 3, Crysis 3, BioShock Infinite, Far Cry 3 and  Far Cry 3: Blood Dragon, some of them still being available.

Gamers can get up to three AAA titles or indie games, which come in packs of two, the only inconvenient is that buyers can’t “create” their own packs. For instance, The Banner Saga and Guacamelee don’t  come together, customers will have to buy two articles if they want both titles, but by doing so, they might get stuck with two other titles they don’t even want.

The good news is, gamers can purchase a Radeon card until August 31, and wait for some new titles to enter the Never Settle campaign. They don’t have to pick up the games or the indie packs the day they buy a AMD card if the games offered are not to their liking, they can choose to wait until something new and more attractive appears. It’s unlikely people will buy an expensive GPU in order to get a $10 game for free. Even if there aren’t many titles that can satisfy a high-end gamer, AMD’s program is worth of praise. Hopefully, the list of titles will be upgraded with more AAA titles of 2014 until the campaign ends.

I’m Load The Game’s co-founder and community manager, and whenever I’m not answering questions on social media platforms, I spend my time digging up the latest news and rumors and writing them up. That’s not to say I’m all work and no fun, not at all. If my spare time allows it, I like to engage in some good old fashioned online carnage. If it’s an MMO with swords and lots of PvP, I’m most likely in it. Oh, and if you’re looking to pick a fight in Tekken or Mortal Kombat, I’ll be more than happy to assist! Connect with me by email markjudge (@) loadthegame.com only
@@MarkJudgeLTG
Previous Facebook brings breaking news with FB Newswire
Next iPhone 6 rumored to feature a curved display