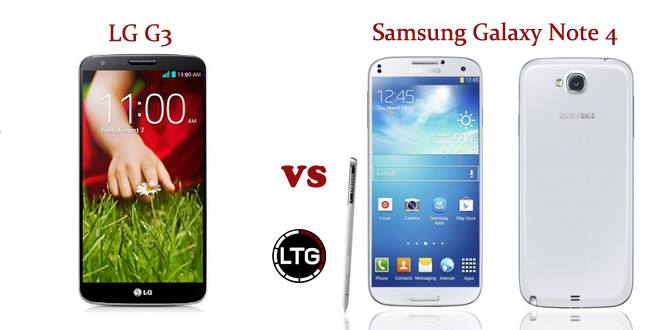 The week has barely started but exciting news about both the Samsung Galaxy Note 4 and the LG G3 has already arrived. This is a great opportunity to put them side by side and compare their possible specs, based on what we know so far. The comparison will be useful considering that the two devices will be among the most popular smartphones of 2014. Recent leaks suggest that their respective launch dates are closing in fast so it’s a good idea to be prepared beforehand.

The Galaxy Note 3 is an impressive device and widely considered to be the best phablet around, but Samsung thinks they can come up with something even better. Rumors about its successor have started flying around almost immediately after it was released last September. It is believed that Samsung Galaxy Note 4 will also be released in September at the Berlin IFA trade show 2014.Samsung’s Vice President of Global Product Planning, Yoon Han-Kil told Reuters earlier this month that the new Galaxy Note will come during the second half of the year. Although September seems like a safe bet, an even earlier release would be better given that competition is fierce on the market.

In any case, Yoon also mentioned that “Our ultimate goal is to make products that consumers really aspire to have. This is how we are trying to find a breakthrough in the stagnant premium market,”. The breakthrough might come in the form of the Note 4’s Youm flexible three-sided OLED display, a technology that was first presented by Samsung during the CES 2013. This is a very controversial rumor so take it with a grain of salt, however if it turns out to be true we might be looking a very innovative device with lots of new possible features.

After months of rumors and speculations we finally have a release date, announced by LG themselves. The company has mentioned in an earning report that the G3 will come out during Q2 in an effort to increase their sales. “Higher revenues are expected in the second quarter with the release of the flagship LG G3 smartphone and wider roll-out of the mass-tier L Series III.” An article on ZDNet Korea also mentions that the device will be out by the end of May, although the exact date wasn’t specified.

The first LG G3 image surfaced yesterday and from what we can see the design will be similar to the LG G2, on the backside at least. We still don’t know how the front of the device will look like, so all we have for the moment are just concept pictures. The image also shows notes that reveal some of it’s specifications, and by the looks of it the LG G3 is ready to compete with the Samsung Galaxy S5 and the HTC One M8.

Very hard to say at this point given that most of this hasn’t been confirmed officially yet. In any case, we can expect the Samsung Galaxy Note 4 to feature more impressive specs than the LG G3. The Note phablets have always been in a class of their own, however the gap seems to be closing in a little. Looking at these rumored specs reveals that the display isn’t that much bigger and the specs aren’t vastly superior to the G3’s. Overall the Note 4 will still be a more powerful device, but it will probably come with a higher price tag as well. We’ll have to wait for the final specs, features and prices to be announced before we can make a decision.

I’m Load The Game’s co-founder and community manager, and whenever I’m not answering questions on social media platforms, I spend my time digging up the latest news and rumors and writing them up. That’s not to say I’m all work and no fun, not at all. If my spare time allows it, I like to engage in some good old fashioned online carnage. If it’s an MMO with swords and lots of PvP, I’m most likely in it. Oh, and if you’re looking to pick a fight in Tekken or Mortal Kombat, I’ll be more than happy to assist! Connect with me by email markjudge (@) loadthegame.com only
@@MarkJudgeLTG
Previous Top free download antivirus software 2014
Next Watch Dogs season pass adds new campaign, mobster gear and cyborgs!