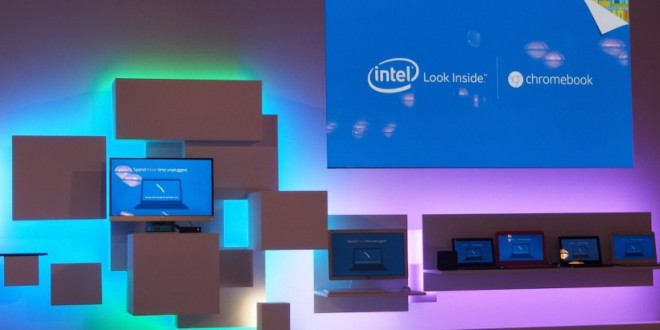 New Chromebooks to be released after Intel and Google team up

Most of us have probably heard by now about the new generation personal computers running Chrome OS as its operating system ( OS that uses Linux kernel and Google Chrome browser plus integrated media player)  Being similar to netbooks, the internet connection is vital but quite a large collection of apps can be used offline, too.  What consumers enjoyed most about these devices was the ability of storing all the data online, on a cloud. The first Chromebooks were sold by Acer and Samsung in 2011. Lenovo, HP and Google also entered the market with Chrome devices at the beginning of 2013.

On Tuesday, Intel’s VP and general manager, Navin Shenoy informed that the chromebooks will be based on Bay Trail-M system on a chip, being optimized for more power, better performance and lower costs. Shenoy also informed that users should expect to see over 11 hours of battery life. Fanless and 15% lighter than before, most of them with touchscreens and folding displays, the chromebooks will impress by its new features, Google Now,  voice commands and offline Play Movies, per VP of product management, Caesar Sengupta. Larger and higher-quality screens  will impress, too.

At least 20 models of Chromebooks with various specifications will be announced by the end of 2014 after the great success other Chrome devices have had all over the world.  These computers are available in over 20 countries and 10 000 schools, improving educational environments.

Google and Intel teamed up and presented some of the first devices in San Francisco, On Tuesday.  Dell and Acer will be launching Chromebooks that will run Core i3 processor this summer and we will be waiting for more information about other top announcements later on.  Most of the computers that have been discussed at the conference on Tuesday will cost around 300$ but no official information was given out yet.

I’m Load The Game’s co-founder and community manager, and whenever I’m not answering questions on social media platforms, I spend my time digging up the latest news and rumors and writing them up. That’s not to say I’m all work and no fun, not at all. If my spare time allows it, I like to engage in some good old fashioned online carnage. If it’s an MMO with swords and lots of PvP, I’m most likely in it. Oh, and if you’re looking to pick a fight in Tekken or Mortal Kombat, I’ll be more than happy to assist! Connect with me by email markjudge (@) loadthegame.com only
@@MarkJudgeLTG
Previous Samsung is working on their new Galaxy Tab S line
Next EA skips a year with the Need for Speed Franchise