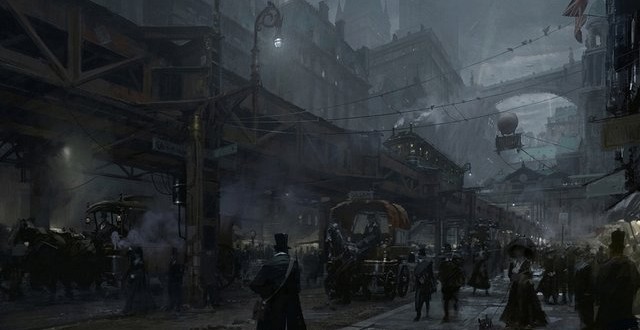 Sony Entertainment announced today that the highly anticipated PS4 exclusive, The Order: 1886 has been pushed back to “early 2015”. This news comes to us via a PS blog post, which also reveals a lot of new details about the game and includes a behind the scenes video with developer Ready at Dawn.

The video and blog post speak about the mythology and history of The Order: 1886 and explain the setting and premise of the upcoming title. The game unsurprisingly takes place in the year 1886 in an alternate history version of Victorian Era London. We find out that a secret war between humanity and half-breed monsters is happening in the days of King Arthur. In response to the impending threat, the King creates the Knights of the Round table, a group of noble men tasked with the protection of mankind. In the year 1886 this group is known as The Order and while its name has changed, its mission did not.

In the latest gameplay footage video we get a glimpse of some of the weapons and technology that will be available in The Order: 1886. Galahad, the character you’ll be playing is seen wielding a Thermite rifle and shooting at enemies from behind cover. The video also presents Isabeau, one of the game’s main protagonists as she is firing a powerful Arc Gun. However, as the blog explains, technology will not be your only ally in The Order: 1886.

“Beyond technology, the Knights have relied on one element they have used for centuries: the Blackwater. While in combat, they are able to use it to heal from otherwise deadly wounds. With centuries of use, the Blackwater has imbued the Knights with an inhuman longevity as well as mental and physical abilities they can use in combat, a state they call Blacksight. Using Blacksight, Galahad enters into a heightened state allowing him to focus his skills and execute precise attacks.”

These new details are certain to make a lot of people (myself included) all the more eager to get their hands on the game. It is quite unfortunate that the title has been delayed, but Sony says there is a good reason for this. “As we look to bring this experience to the players, we have decided to spend some extra time to deliver on the promise we made when we first introduced the game. As such, you can expect The Order: 1886 to come exclusively to the PlayStation 4 in early 2015.” The game will make an appearance at E3 2014 and we’ll be sure to bring you all the latest news and updates from the upcoming event so stay tuned.

I’m Load The Game’s co-founder and community manager, and whenever I’m not answering questions on social media platforms, I spend my time digging up the latest news and rumors and writing them up. That’s not to say I’m all work and no fun, not at all. If my spare time allows it, I like to engage in some good old fashioned online carnage. If it’s an MMO with swords and lots of PvP, I’m most likely in it. Oh, and if you’re looking to pick a fight in Tekken or Mortal Kombat, I’ll be more than happy to assist! Connect with me by email markjudge (@) loadthegame.com only
@@MarkJudgeLTG
Previous Eve Online gets narrative history book
Next Watch Dogs Companion: ctOS – Cops and Robbers