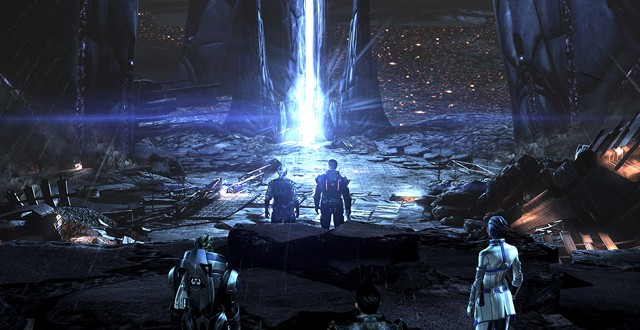 Just as expected Bioware talked about the next Mass Effect title during EA’s E3 press conference today. What we didn’t expect however was for the company to reveal so little about the upcoming game. While they didn’t seem too keen on sharing any solid details, there are a few things we’ve learned today regardless. Bioware apparently wants to take the franchise in a completely new direction. They say the game will take place in a whole new region of space. “As we start designing the next Mass Effect game, we start by asking fans what they want, what Mass Effect means to them,” said Bioware’s Casey Hudson.

“One of the things that fans have told us most about what they want in the next Mass Effect game is to go somewhere new and to move forward. We’re taking you to a whole new region of space.” He also hinted that the game will have a much bigger scale than previous installations.”Pick a planet across the other side of the galaxy and fly there, and see what you’ll discover”. In all fairness you can already do this in pretty much every Mass Effect game. We assume he’s saying that there will be many more locations that can be explored in the upcoming title.

The video posted above reveals that the team is developing the game for next-gen consoles as well. “Imagine what we can do now with new consoles and amazing software, it looks amazing”. This was rumored some time ago, but now it seems pretty much confirmed. We also got the chance to get a glimpse of the new protagonist although most of the pictures shown were just conceptual images. The new hero is shown wearing the infamous N7 armor, which suggests that he/she will be human this time as well. But let’s hope Bioware adds the option of choosing you race in the next Mass Effect.

As a final note, Casey mentions that Bioware Montreal is handling the Mass Effect project while Bioware Edmonton is working on a different project. No further details were given except that this game will be a brand new IP. I was really hoping that more details would be revealed at E3, maybe even the rumored trailer. But at least we got to see some new footage and (kinda) received confirmation that the next Mass Effect will be on next-gen consoles as well. Stay tuned for more E3 2014 coverage.

I’m Load The Game’s co-founder and community manager, and whenever I’m not answering questions on social media platforms, I spend my time digging up the latest news and rumors and writing them up. That’s not to say I’m all work and no fun, not at all. If my spare time allows it, I like to engage in some good old fashioned online carnage. If it’s an MMO with swords and lots of PvP, I’m most likely in it. Oh, and if you’re looking to pick a fight in Tekken or Mortal Kombat, I’ll be more than happy to assist! Connect with me by email markjudge (@) loadthegame.com only
@@MarkJudgeLTG
Previous E3 2014: Star Wars: Battlefront in the making by DICE
Next E3 2014: Battlefield Hardline Closed Beta is live