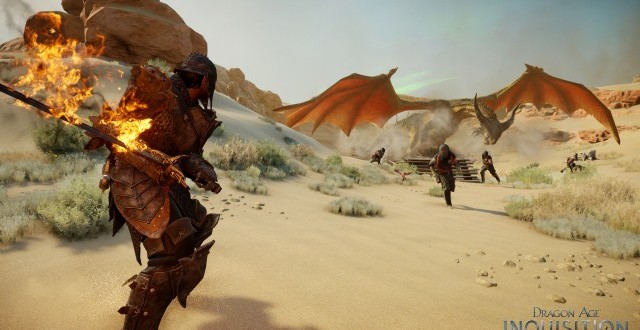 Dragon Age Inquisition, one of the most promising games of the year has just become even more…well, promising. Bioware producer Cameron Lee has revealed today that the upcoming fantasy RPG will have no less than “40 major endings with additional variations.” He also mentions that Dragon Age Inquisition lets you make your hero look however you want and play him or her just the way you want to. Furthermore, Lee says that character customization will let you choose between any combination of “2 genders, 4 races, 3 classes, 9 specializations and different voices.”

A lot of Dragon Age Inquisition footage was presented at E3 2014, including the new trailer that was posted above. Aside from that, a new gameplay demo was also showcased at the event. Executive producer Mark Darrah and creative director Mike Laidlaw presented the demo and revealed some more details about the game. Some of the highlights include tactical view for all platforms, more romances than in any other Bioware game, mounts, and no enemy scaling, to mention just a few. The duo also talked about the skill customization, which will include more than 200 spells and talents. They also mention that some skills will developed as you continue to upgrade your Inquisition.

As you might imagine, dragons are a big focus of the game and as such they have been reworked. You can now target individual limbs to weaken a dragon and it will react accordingly by limping or even tripping. Last but not least, the devs talked about the followers although they didn’t seem keen on revealing much. Nine followers will be available in Dragon Age Inquisition and there are also advisers such as Leliana that can help you out further. The only familiar character that will accompany you in your journey seems to be Varric.

Others such as Morrigan, Alistair, and Cullen will also appear in the game, but can not be recruited. I’m kinda disappointed that Leliana will not be among the companions, but at least she seems to be playing an important role in the game. Bioware mentioned that we can expect to see a few cameo appearances at some point. They also say that this will be a very long game that will take you around 50 hours to complete on a normal playthrough. Dragon Age Inquisition will be released on October 7th for PS3, PS4, Xbox 360, Xbox One, and the PC. Stay tuned for more news and updates.

I’m Load The Game’s co-founder and community manager, and whenever I’m not answering questions on social media platforms, I spend my time digging up the latest news and rumors and writing them up. That’s not to say I’m all work and no fun, not at all. If my spare time allows it, I like to engage in some good old fashioned online carnage. If it’s an MMO with swords and lots of PvP, I’m most likely in it. Oh, and if you’re looking to pick a fight in Tekken or Mortal Kombat, I’ll be more than happy to assist! Connect with me by email markjudge (@) loadthegame.com only
@@MarkJudgeLTG
Previous Sony announces The Assembly for PS4 and Project Morpheus
Next iPad Air 2 and other Apple devices to be produced this month