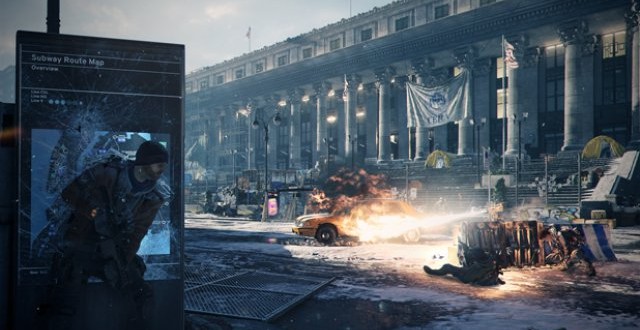 If you were looking for more details about Tom Clancy’s The Division, today is your lucky day. Ubisoft recently made a post on their blog in which they describe and explain all we’ve seen in the demo presented at E3. The company starts by saying that The Division is different than other apocalypse-themed games in the sense that you’re not just fighting for survival, your goal is to make things right again. This is a difficult endeavor even for a special agent such as yourself, but luckily you have a wide range of tools to help you out. One of them is the holographic map, which you can pull up and “see your area’s security level, contagion level, and citizen morale, all of which can improve as you complete nearby objectives,” Ubisoft explains.

They also reveal that a good strategy is essential when facing the bad guys. We’ve seen in the demo that a group of bandits were attacking civilians so naturally The Division had to intervene and save them. “While the bandits’ leader kept his men focused on a megaphone-assisted tirade directed at the defenders, the agents stayed low and crept around behind them, opening fire on a couple of stragglers near the back of the group. One died instantly, but the other went running to warn his buddies. In seconds, the scene devolved into a heavy firefight.” Ubisoft admits that the scene was also used to show off the game’s cover mechanics and some of the secondary abilities such as the Firefly drone and the flamethrower turret.

The company also gives some details regarding one of the most unique features found in The Division, the companion app. “At this point in the demo, two agents were being assisted by a third support player, who was piloting a drone via The Division’s companion tablet app. Playing as a drone is synchronous with the “real” game; on a tablet, you’ll see the players and their surroundings in real time. More important, you’ll also see their enemies, and can tag them so your allies will spot them, even through walls.” As a final note, Ubisoft reminds us that Tom Clancy’s The Division is a massive game and the demo only revealed a small part of its world.

Unfortunately the company still hasn’t said anything about an exact release date so all we know for now is that it will launch sometime during 2015 for Xbox One, PS4, and the PC. Stay tuned for all the latest news and updates.

I’m Load The Game’s co-founder and community manager, and whenever I’m not answering questions on social media platforms, I spend my time digging up the latest news and rumors and writing them up. That’s not to say I’m all work and no fun, not at all. If my spare time allows it, I like to engage in some good old fashioned online carnage. If it’s an MMO with swords and lots of PvP, I’m most likely in it. Oh, and if you’re looking to pick a fight in Tekken or Mortal Kombat, I’ll be more than happy to assist! Connect with me by email markjudge (@) loadthegame.com only
@@MarkJudgeLTG
Previous Destiny PC is being discussed, but no announcements yet
Next Call of Duty: Advanced Warfare storytelling explained by Sledgehammer