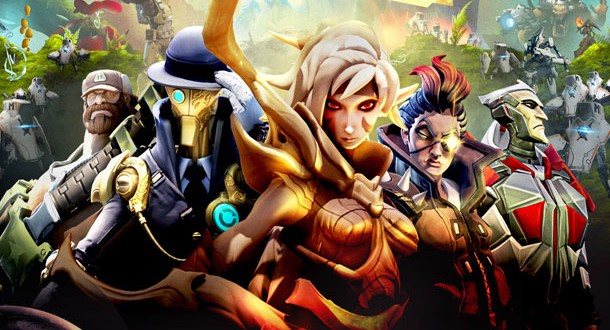 Gearbox Software just announced a brand new IP that goes by the name of Battleborn. So what did the creators of  Borderlands cook up for us this time? Well, the upcoming title looks to be a first-person shooter with an emphasis on characters. The team refers to Battleborn as a “Hero Shooter”, a pretty good name considering that this game is all about the heroes at the end of the day. A lot of companies tend to develop their latest titles with four-player co-op in mind these days. Gearbox however, takes it one step further and offers a five-player cooperative campaign as well as several competitive match types.

“As a genre-fused, hobby-grade, co-operative and competitive FPS exploding with eye-popping style and an imaginative universe, Battleborn is the most ambitious video game that Gearbox has ever created,” Gearbox president Randy Pitchford said. Judging by its trailer, Battleborn looks more like a MOBA than anything else, but trailers can sometimes be deceiving I suppose. The most interesting fact about the game at first glance seems to be the character variation. I can only describe the five Battleborns presented in the video as such: elven archer, British robot, blonde Alice (Madness Returns), Team Fortress cosplay and “Warhammer 40K wants their Eldar back”. But that’s just me. There will be five factions to choose from, namely Eldrid, Jennerit, Rogue, Peacekeepers, and Last Light Consortium. As for the classes, it’s not exactly the traditional approach as you can see below.

“Think of each of the different Battleborn as a class and a character all rolled up into one. Each Battleborn hero has a unique set of skills and capabilities distinct enough where each of these characters could be the main characters of their own games. For example, Rath of the Jennerit Empire wields swords and is a melee specialist who scoffs at other characters, like Oscar Mike, who uses guns and calls in airstrikes. Meanwhile, Thorn of the Eldrid is deadly accurate with her magic-infused bow and arrow and is strong when paired with Miko, who can heal and buff allies in between ninja-like attacks with deadly Kunai. Keep in mind that each Battleborn hero can also be customized both cosmetically and through game play builds that span various play styles or otherwise enable you to adapt to the very dynamic game play that unfolds.”

Battleborn will be released sometime during 2015 for PS4, Xbox One, and the PC.

I’m Load The Game’s co-founder and community manager, and whenever I’m not answering questions on social media platforms, I spend my time digging up the latest news and rumors and writing them up. That’s not to say I’m all work and no fun, not at all. If my spare time allows it, I like to engage in some good old fashioned online carnage. If it’s an MMO with swords and lots of PvP, I’m most likely in it. Oh, and if you’re looking to pick a fight in Tekken or Mortal Kombat, I’ll be more than happy to assist! Connect with me by email markjudge (@) loadthegame.com only
@@MarkJudgeLTG
Previous Titanfall Frontier’s Edge DLC pack announced
Next LG G Pad 10.1 to Arrive in the US – Specs and Release Date revealed