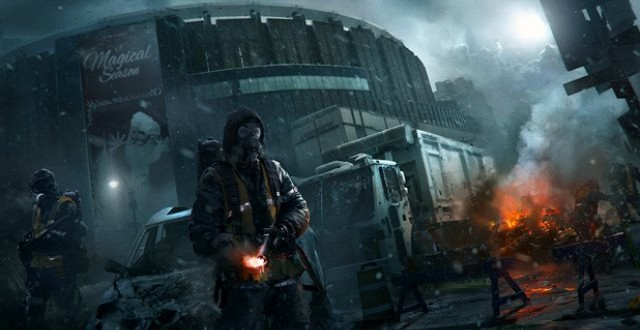 Back at E3 2014 Ubisoft revealed a pretty impressive demo for their highly anticipated title, Tom Clancy’s The Division. It seems the company itself was pretty impressed by it as they followed up by discussing in detail about it shortly after the event. Now we get to hear more info about the demo for a third time courtesy of an interview featuring Game Director Ryan Barnard. We agree that the demonstration was great, but I really wish they would have showed something new instead. In any case, the director does offer some interesting insight so the interview is definitely worth a look. This is mostly because during the discussions we got to hear more about one of The Division’s most intriguing group of enemies, The Cleaners.

“The Cleaners are a roaming group of very, very dangerous group of gentlemen,” Barnard explains. “They’re attracted to areas of high contagion. They’re extremely aggressive to anyone they perceive as sick.”They kind of lost it mentally and anyone that could potentially be sick, is sick, or dead bodies, they’re burning with their flamethrowers. So they are very dangerous in the game and you won’t want to take them on by yourself.”  Told you they sounded very intriguing. It’s pretty hard to create interesting enemies when a game is based on real world events because you know, reality is boring. The Division seems to manage it just fine however so we’re excited to see what other enemy types Ubisoft came up with.

Aside from enemies, Barnard also discusses a bit about The Division’s character customization, specifically, whether or not there will be classes and more importantly, why. “Well, we like to call ourselves a classless RPG,” the game director replies when asked about classes. “So we don’t want to front load our players with a choice right when you start the game and you don’t know how the game works, and you don’t know how you may wanna play. So we’d rather have you discover how you like to play and what weapon types you like, what skills you like, and give you the freedom to make the choice yourself.”

Some other subjects that were touched upon during the interview are strongholds and gadgets, but I don’t want to spoil everything so I’ll just stop there. Unfortunately no new major details were revealed ever since E3 2014, but these little bits of info here and there are very welcomed nevertheless. Tom Clancy’s The Division will be released sometime during 2015 for PS4, Xbox One, and the PC.

I’m Load The Game’s co-founder and community manager, and whenever I’m not answering questions on social media platforms, I spend my time digging up the latest news and rumors and writing them up. That’s not to say I’m all work and no fun, not at all. If my spare time allows it, I like to engage in some good old fashioned online carnage. If it’s an MMO with swords and lots of PvP, I’m most likely in it. Oh, and if you’re looking to pick a fight in Tekken or Mortal Kombat, I’ll be more than happy to assist! Connect with me by email markjudge (@) loadthegame.com only
@@MarkJudgeLTG
Previous Windows Phone 8.1 coming to Lumia devices today
Next The Last of Us Remastered: Full list of PS4 improvements revealed