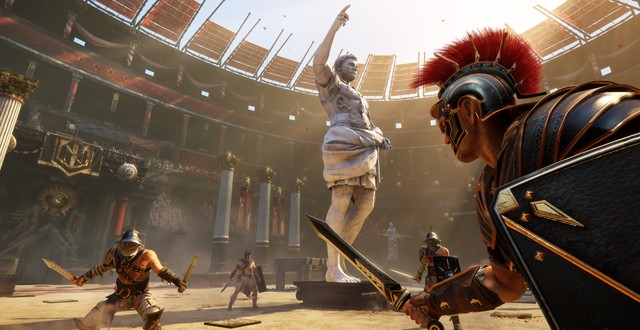 Ryse: Son of Rome heading to PC later this year

Publisher Deep Silver announced earlier that the action-packed Ryse: Son of Rome will grace the PC later this year. The game shares a similar story to Dead Rising 3 as both were released back in November for the Xbox One and both will be arriving for PC this Fall. Naturally, this means that they will feature a fair share of improvements as a result. Developer Crytek confirmed that Ryse: Son of Rome will come with 4K resolution support and will include all the previously released DLC. The game will be available both digitally and at retail with more details about availability and release date to follow.

“We are bringing the Ryse experience to PC, with 4K resolution support,” said Crytek’s business development director Carl Jones. “4K gaming is another leap in graphics quality for PC gamers and Ryse is the perfect showcase for what’s now possible in high-end PC games. We’ve given our team the opportunity to show what CRYENGINE can really achieve, without compromising quality, thanks to the incredible hardware available now to PC gamers. Ryse will be a benchmark PC graphics showcase this year and probably for a long time in future. Our community asked for a Ryse PC version, and we have the means and technology to deliver this title with the highest quality possible.”

Ryse: Son of Rome follows the story of Marius Titus from childhood to becoming a powerful Roman General. You will control not only Marius, but his fearsome legion as well. On the Xbox One you do this with Kinect voice commands, but we don’t know how it will work on the PC yet. The game mostly received mixed reviews with most outlets praising the stunning visuals, but criticizing its repetitive combat and the presence of too many quick time events. Stay tuned for more news and updates.

I’m Load The Game’s co-founder and community manager, and whenever I’m not answering questions on social media platforms, I spend my time digging up the latest news and rumors and writing them up. That’s not to say I’m all work and no fun, not at all. If my spare time allows it, I like to engage in some good old fashioned online carnage. If it’s an MMO with swords and lots of PvP, I’m most likely in it. Oh, and if you’re looking to pick a fight in Tekken or Mortal Kombat, I’ll be more than happy to assist! Connect with me by email markjudge (@) loadthegame.com only
@@MarkJudgeLTG
Previous Killzone: Shadow Fall’s low resolution causes Sony to get sued for deceptive marketing
Next League of Legends 2014 World Championships prize pool smaller than anticipated