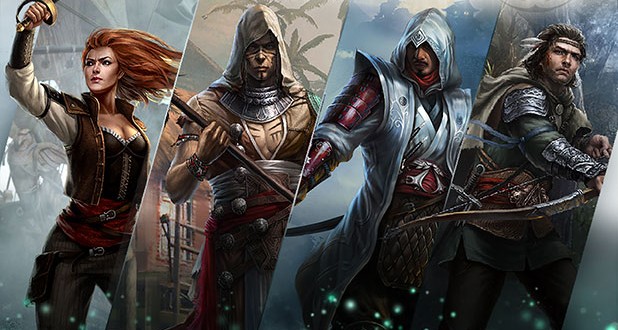 A new Assassin’s Creed game was released on the iOS

Ubisoft has released a new Assassin’s Creed game, called “Memories”, for the iOS. According to the developer, the game is combining multiple elements such as card battle, RPG and strategy gameplay. Players will have to chase down their targets throughout history and defeat them. Characters can be equipped with powerful gear and updated in order to be stronger and more effective during missions.

“Memories” allows players to visit multiple eras through a new technology introduced in the AC universe, the Abstergo mobile Animus. Apart from the already well-known eras such as the Third Crusade, Renaissance Italy and The Golden Age of Piracy, players will be able to visit some new locations. These include Feudal Japan and the Mongolian Empire, which are some of the most requested time periods by fans of the franchise. During the game, players will be able to guide assassins such as Ezio Auditore or Altair, as well as new ones, specific for their era.

“Memories” also features a multiplayer mode that allows gamers to join a guild of Assassins and battle together. Players can also engage in a massive 20 vs 20 PvP combat between guilds. The RPG elements also involve the players’ ability to customize and upgrade their characters. Weapons and equipment can be collected from all the eras and used in combat. Also, the characters’ appearance can be customized, with players being able to equip them with accurate historical gear.

Assassin’s Creed: Memories is free to play on the iOS. According to the developer, no purchases are required in order to finish the game. There are in-app purchases that can help players accelerate gameplay, but Ubisoft assures that the game can be completed without spending any real money. When asked about an Android version, the developer said they don’t have anything planned in that direction yet.

I'm a journalism graduate and an occasional gamer. As a kid I used to own a NES clone called "Terminator 2", which was hugely popular in my country. I like old school games and adventure games but I occasionaly play RPG's and Shooters as well, though I wouldn't call myself an expert at these kinds of games. When I'm not writing or playing games I prefer reading detective or fantasy novels.
Previous Meizu MX4 gets record score on Antutu
Next Bioware reveals more details about combat in Dragon Age Inquisition