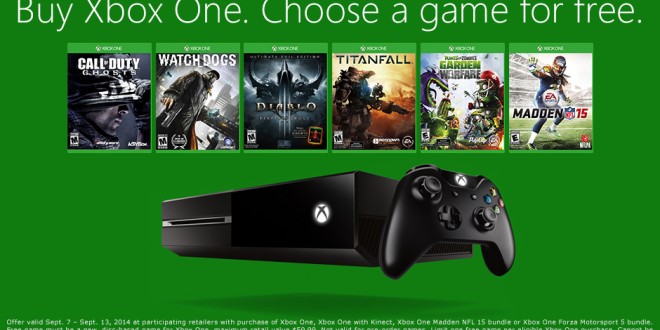 Microsoft is really trying hard to sway more customers to its side I’ll give them that. The company’s latest move includes giving away a free game to anyone who purchases an Xbox One from select retailers next week. Even better, the free game will be a title of your choice and you can ask for anything as long as it’s a new disc-based game for the Xbox One with a maximum retail value of $59.99. Also, the offer is not available for pre-orders so you wont be able to get Destiny for example if you purchase a new console today. However, according to the rules, you should be able to get it after it launches on September 9th as this promotion begins on the 7th and lasts until September 13th.

But maybe you don’t want Destiny, in which case Microsoft recommends a few other great titles you might be interested in. These include Titanfall, Watch Dogs, Diablo 3: Ultimate Evil Edition, Call of Duty: Ghosts, Plants vs Zombies: Garden Warfare and Madden NFL 15. But again, you can get any new game, these are just a few examples. Also worth noting is the fact that the offer is available for Xbox One bundles as well such as the Xbox One Madden NFL 15 bundle or the Xbox One Forza Motorsport 5 bundle. Microsoft’s Xbox Wire announcement regarding eligibility for the promotion can be found below.

“Offer valid September 7-September 13, 2014 at participating retailers with purchase of Xbox One, Xbox One with Kinect, Xbox One Madden NFL 15 bundle, or Xbox One Forza Motorsport 5 bundle. Free game must be a new, disc-based game for Xbox One, maximum retail value $59.99. Not valid for pre-order games. Limit one free game per eligible Xbox One purchase. Cannot be combined with other offers. Refurbished consoles or used games not included. See your local retailer for details.”

Microsoft didn’t mention the participating retailers, but word has it that they include Walmart, Amazon, Best Buy, GameStop, Toys R US and Target.

I’m Load The Game’s co-founder and community manager, and whenever I’m not answering questions on social media platforms, I spend my time digging up the latest news and rumors and writing them up. That’s not to say I’m all work and no fun, not at all. If my spare time allows it, I like to engage in some good old fashioned online carnage. If it’s an MMO with swords and lots of PvP, I’m most likely in it. Oh, and if you’re looking to pick a fight in Tekken or Mortal Kombat, I’ll be more than happy to assist! Connect with me by email markjudge (@) loadthegame.com only
@@MarkJudgeLTG
Previous Ubisoft will never “drop the ball” on Assassin’s Creed’s quality
Next Angry Birds Transformers on October 15, Stella is out of the cage!