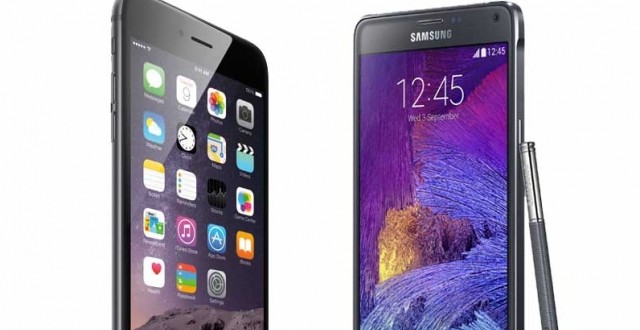 Two of the most highly anticipated devices of the year have finally been announced and detailed earlier this month. While the Samsung Galaxy Note 4 made its first official appearance on September 4th at the IFA Trade Show, the iPhone 6 Plus along with the iPhone 6 were only unveiled on September 9th during Apple’s special event. In previous years the Note phablets didn’t have a lot of direct competition thanks to their massive screen sizes, but things have definitely changed this year. The LG G3 and OnePlus One proved that there’s room on the market for many more high-end smartphones with large displays and now it’s Apple’s turn to join the party with the iPhone 6 Plus.

This device is a considerable improvement over the iPhone 5s and also packs a bigger punch than the 4.7-inch iPhone 6, but how does it stack up against the Samsung Galaxy Note 4? At first glance both devices seem to have a lot going on for themselves, but as always, one will be more impressive than the other. So we’re going to take a look at their specs, prices and operating systems among other things in order to find out which one is the better candidate for a possible purchase. In this comparison we’re only going to talk about the iPhone 6 Plus as the standard iPhone 6 is not a suitable competitor to the Samsung Galaxy Note 4 phablet because of its smaller screen size. Without further ado, let’s take a look at these titans of the smartphone world and see what each of them brings to the table.

First off, as you can image size isn’t everything, but it’s certainly important in this comparison. The Samsung Galaxy Note 4 is a 153.5 x 78.6 x 8.5 mm device with a huge 5.7-inch Super AMOLED display with 1440 x 2560 resolution and 515 PPI. Pretty much any device will be hard pressed to compete with an impressive screen like that, but the iPhone 6 Plus will definitely try. Apple’s latest flagship measures 158.1 x 77.8 x 7.1 mm and comes equipped with a 5.5-inch IPS LCD panel with 1080 x 1920 resolution and 401 PPI. We do need to give props to Apple for all the considerable improvements they made since the iPhone 5s, but it’s just not enough to beat the Samsung Galaxy Note 4. Sadly the iPhone 6 Plus didn’t end up featuring a Sapphire glass screen like we all hoped so it doesn’t really have any advantage over Samsung’s phablet in the display department. On the bright side, the device is certainly thinner so that’s something to take into consideration.

Hardware-wise, the Samsung Galaxy Note 4 comes in two variants, each more impressive than the last. One of them features a Qualcomm Snapdragon 805 quad-core processor @ 2.7 GHz Krait 450 with 3GB of RAM and Adreno 420 GPU. The other model comes equipped with an Exynos 5433  octa-core processor with four 1.3 GHz Cortex A-53 cores and four 1.9 GHz Cortex A-59 cores along with a Mali-T760 GPU and 3GB of RAM. The Samsung Galaxy Note 4 also packs a 16MP primary sensor with OIS and LED flash, 3.7MP secondary camera,  32GB internal storage memory with microSD card support good for up to 128 GB additional storage and a massive 3,220 mAh battery. The Samsung Galaxy Note 4 comes with some great specs, but its competitor isn’t anything to sneeze at either.

The iPhone 6 Plus runs on Apple’s new 64-bit A8 chipset complete with a dual-core Cyclone CPU clocked at 1.4 GHz, PowerVR GX6650 GPU and 2GB of RAM. The iPhone 6 Plus features an 8 MP primary sensor, just like its predecessor, but comes with OIS, dual-LED and various other features that greatly improve image and video quality. There is also a rather small 1.2MP secondary camera. As for the internal storage memory, Apple announced three iPhone 6 Plus variants that come with 16GB, 64GB and 128GB storage, respectively. Unfortunately there is no microSD card support, which is definitely a disadvantage over the Samsung Galaxy Note 4. Apple didn’t announce the battery size for the iPhone 6 Plus, but presumably we can expect to see a vast improvement over the iPhone 5s so take that as you will. The battery is expected to last around 384 hours in stand-by mode and 24 hours of talk time.

Now, the Samsung Galaxy Note 4 has a lot of advantages over the iPhone 6 Plus, but the latter arguably has the upper hand when it comes to the operating system. This isn’t an Apple vs iOS battle so I’m not saying that one is better than the other, don’t get me wrong. However, the iPhone 6 Plus runs on the iOS 8, the latest major update to Apple’s operating system, which was officially launched together with the iPhone 6, iPhone 6 Plus and the Apple Watch a couple of days ago at the special event. Meanwhile, the Samsung Galaxy Note 4 runs on Android 4.4.4 KitKat, which is also the latest version of the operating system, but it’s not the latest major update. Indeed, Android L will only launch later this year so we didn’t expect to see the phablet running it just yet. Unfortunately, Samsung devices have not been a top priority for the latest versions of Android in the past and this will likely not change any time soon.

That being said, the iPhone 6 Plus is generally more interesting when it comes to the OS just because of the fact that it comes equipped with the newest major update and that’s always appealing to many customers. Admittedly, NFC and other new iOS 8 features have already been available for some time on Android so that’s not much of a novelty. But the operating system has other tricks up its sleeve such as the new Metal gaming technology, which sets the bar pretty high when it comes to mobile gaming and a lot of major developers have already jumped on the bandwagon and confirmed that they will be making games for the iPhone 6 and iPhone 6 Plus. This means that a lot of mobile gamers will likely switch to iOS in the future and that’s pretty bad news for Android. We’ll just have to wait and see if Android L can offer something else that will sway customers to its side once it launches. But even more importantly for the sake of this comparison is the question: will the Samsung Galaxy Note 4 upgrade to Android L in due time after the final build of the OS is released by Google? I suspect that we’ll have to wait at least a few months for that to happen, but it’s pretty hard to say at this point since there wasn’t any official announcement from Samsung so I’ll just leave it at that.

Last but not least, we have to talk about pricing since this will be a deciding factor for many people. Samsung unfortunately didn’t discuss this aspect during the IFA, but they did mention that the Samsung Galaxy Note 4 will feature a premium price tag. Most sources speculate that the device will cost $300 on a two-year contract and anywhere from $600 to $800 unlocked. The phablet is said to become available for purchase in early October and will make its way to all major US carriers so we’ll have to wait until then for the specific price. Apple on the other hand did announce pricing for the iPhone 6 Plus and it will certainly cost you quite a bit if you want the maximum amount of storage. A two-year contract iPhone 6 Plus is priced at $300 for the 16GB version, $400 for the 64GB and $500 for the 128GB. But if you don’t want to commit to any carriers, you can purchase an unlocked iPhone 6 Plus for $750 (16GB), $850 (64GB) or $950 (128 GB). The device will become available for purchase on September 19th in the US.

All in all, the iPhone 6 Plus will be a bit more expensive compared to the Samsung Galaxy Note 4, but this isn’t all that surprising. However, if the Samsung Galaxy Note 4 will end up costing $800, then the 16GB iPhone 6 Plus will actually end up being a bit cheaper. In regards to the specs, it’s pretty safe to say that the Samsung Galaxy Note 4 is overall superior, but the iPhone 6 Plus is arguably not that far behind. Also, Apple is offering a device equipped with a newer operating system, which is certainly important for many potential customers. If you’re already an iOS user the iPhone 6 Plus is pretty much a dream come true even if you’ll have to pay quite a pretty penny if you want the maximum amount of storage. On the other hand, the Samsung Galaxy Note 4 offers increased performance and a truly impressive screen that puts most other devices to shame. Not to mention that the S Pen now comes with several new features that are bound to delight users. The drawback is that you may have to wait a while until the device upgrades to Android L, but it will happen eventually so all you need is patience. As always, the final decision is up to you and it’s definitely not an easy one that’s for sure.

I’m Load The Game’s co-founder and community manager, and whenever I’m not answering questions on social media platforms, I spend my time digging up the latest news and rumors and writing them up. That’s not to say I’m all work and no fun, not at all. If my spare time allows it, I like to engage in some good old fashioned online carnage. If it’s an MMO with swords and lots of PvP, I’m most likely in it. Oh, and if you’re looking to pick a fight in Tekken or Mortal Kombat, I’ll be more than happy to assist! Connect with me by email markjudge (@) loadthegame.com only
@@MarkJudgeLTG
Previous Gear Blink from Samsung will rival Google Glass
Next Metal Gear Solid 5 The Phantom Pain gets TGS 2014 teaser, new MGS Collection coming this year