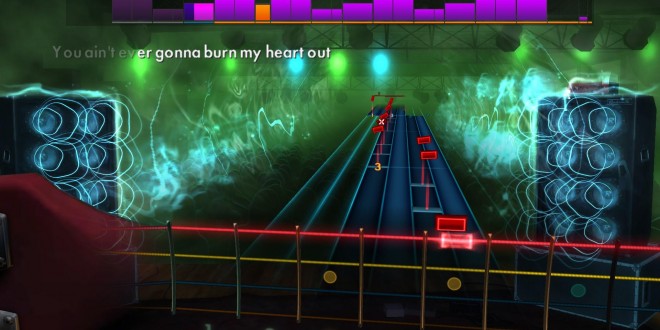 Ubisoft announced that Rocksmith is coming to PS4 and Xbox One and it will be available starting November 4. According to the developer, the game has taught over 2 million people to play the guitar.

The new-gen version of Rocksmith will have a few notable enhancements. First of all, the game is released in full HD 1080p resolution, which, according to Ubisoft, offers it better clarity and visual quality. Through the integrated streaming and capture feature you can now easily record and share your performances. Furthermore, players can take advantage of PlayStation 4’s Remote Play feature. If you are practicing in another room, you can use the Remote Play to view songs on your PS Vita, without any scoring or input being required.

Rocksmith 2014 will ship with over 50 tracks. Those who also own the last-gen versions can import their DLC cross-platforms for free. Should players want more songs, Ubisoft offers an library of more than 300 extra tracks, available for purchase. When you buy the game, you will also receive a Rocksmith Real Tone Cable, which you need in order to connect your guitar to the PS4 or Xbox One console and to use it as a controller.

The original Rocksmith game was developed and published by Ubisoft in October 2011 for Xbox 360 and PlayStation 3, in North America. One year later, in September 2012, the game came out in Australia and Europe and in October 2012 in Japan, on the same consoles. A PC version was also released in October 16, 2012, after numerous delays. Rocksmith uses the technology originally intended for Guitar Rising, a project that was eventually canceled. Rocksmith 2014, which is considered a replacement for the original game rather than a sequel, was released on October 22, 2013 on Pc, Mac, PS3 and Xbox 360, and it will be released this November on the next-gen consoles.

I'm a journalism graduate and an occasional gamer. As a kid I used to own a NES clone called "Terminator 2", which was hugely popular in my country. I like old school games and adventure games but I occasionaly play RPG's and Shooters as well, though I wouldn't call myself an expert at these kinds of games. When I'm not writing or playing games I prefer reading detective or fantasy novels.
Previous Fifa 15 is now available in North America
Next Warframe update 14.5 out now on PS4