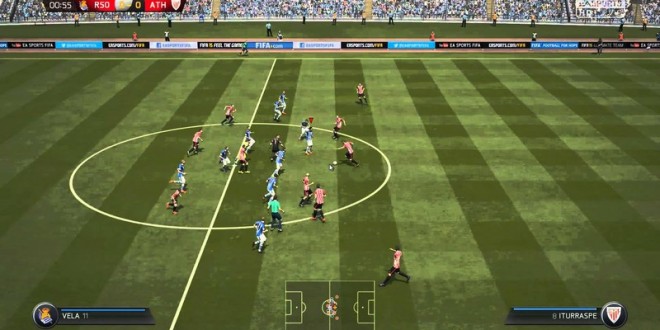 Like every FIFA launch, this one is no different. One day in, and the FIFA 15 PC version has already encountered a serious and hilarious bug. EA support forums have been flooded with player complaints after the game was released in North America, this Tuesday. Reportedly, after a match kick-off between Spanish rivals Real Sociedad and Athletic Club Bilbao, all 22 players started rushing towards midfield in an attempt to get ball possession. FIFA 15 players who are affected from this bug have no sound what so ever at the beginning of the match, and all players start running towards the ball. The first video of this bug was uploaded on Youtube by FIFA 15 user “Koldo Sagarzazu.”

According to other users’ complaints, an additional symptom for this is the inability to get players to shoot the ball in any direction. When attempting to do so, the player turns and frantically cannons the ball in the opposite direction. This elementary school type of “take him or break him” carnage has no fix yet, and one of EA’s community manager has been interacting with players on the official support forum trying to provide solutions that can end the madness. One of the possible fixes suggested is to try the “Repair Install” option by right-clicking on the game in the Origin library. Players have also been advised to turn off Origin while in game and disable all GPU tweaking tools, in case they are using any.

The issues don’t seem to be ending here. More than 100 users have reported that the goalkeeper is running alone towards center field, while other players are reporting problems in the game’s engine, which seem to be causing inaccurate and weird passing trajectories, out of shape goalposts, inaccurate naming of the players, and uniform selection scene issues. Some people speculate that these bugs are a result of EA’s anti-piracy policy, but all people who are experiencing these issues seem to have original FIFA 15 copies. My take on the matter is that these errors appear due to some engine design faults, and they should be corrected pretty soon. Worth mentioning that FIFA 15 users who have bought the game through Origin are entitled to a refund thanks to the Great Games Guarantee policy. Check out the FIFA 15 PC bug trailer below:

I'm Razvan, a sports and first-person shooter enthusiast. I've always loved writing, even more so when it involves games. When I'm not playing on my PS3 or writing, I like to run exhausting cardio workouts, play soccer, watch a good movie, or read a good book.
Previous League of Legends “naughty players” will not be ranked
Next Guild Wars 2 free trial starts tomorrow, lasts one week