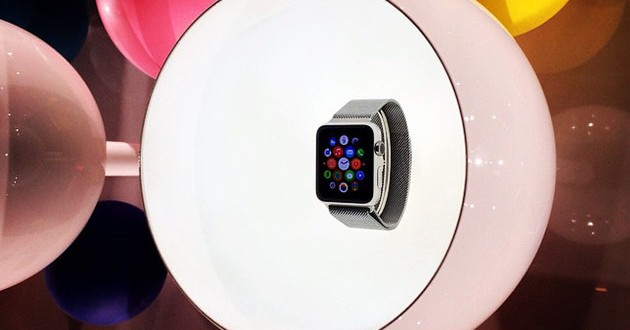 The Apple Watch is only scheduled to launch in early 2015 so you’re not likely to get your hands on it any time soon. However, if you happen to be in Paris you might just be able to catch a quick glimpse of the device. The Fashion Week is currently underway and French retailer Colette has an Apple Watch on display that will stay there only for today. Apple’s upcoming smartwatch is safely tucked away behind a window display that resembles the device’s user interface. Unfortunately even if you do happen to be in the area you will only be able to look at the Apple Watch as no trying on is allowed and you can’t purchase it either. Wouldn’t do you much good even if you could though because the watch is running on a demo program and you couldn’t try out any of the functions anyway.

Colette didn’t say if it will be able to sell the Apple Watch once it launches. However, the retailer does seem to have a pretty close relationship with Apple seeing as how the company allowed it to put it on display so it’s pretty safe to assume that Colette will indeed end up selling the device. But how much will it cost anyway? Well, the standard price will be $350, but rumor has it that Apple will launch three versions and the other two will be much more expensive. According to a certain analyst, one of these variants will feature a stainless steel body and sapphire glass display so he predicts that it will end up costing around $1,000. He also says that a solid gold Apple Watch Edition will also be launched and it will cost no less than $5,000.

Apple hasn’t said anything about other versions besides the standard one so we’ll just regard these as speculations and nothing more for now. The Apple Watch will start shipping in February 2015.

I’m Load The Game’s co-founder and community manager, and whenever I’m not answering questions on social media platforms, I spend my time digging up the latest news and rumors and writing them up. That’s not to say I’m all work and no fun, not at all. If my spare time allows it, I like to engage in some good old fashioned online carnage. If it’s an MMO with swords and lots of PvP, I’m most likely in it. Oh, and if you’re looking to pick a fight in Tekken or Mortal Kombat, I’ll be more than happy to assist! Connect with me by email markjudge (@) loadthegame.com only
@@MarkJudgeLTG
Previous Scalebound allows you to befriend dragons, likely to be an open-world game
Next Purchasing a virtual ticket for BlizzCon 2014 will earn you some neat in-game rewards