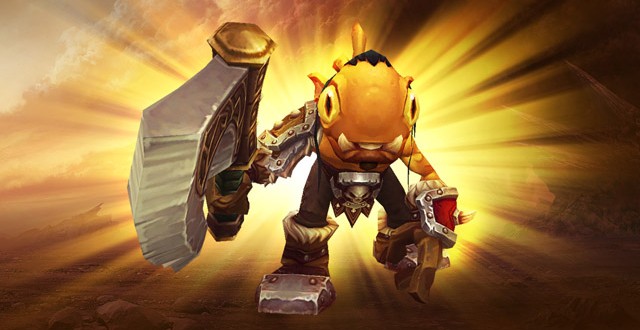 BlizzCon 2014 is closing in fast and we’re eager to see all the live competitions, cosplay contests and all the other good stuff that will take place at the event. But first thing’s first, you need a ticket and they’re all sold out already so there’s no chance of buying one now unfortunately. However, you still have the option of purchasing a virtual ticket, which will allow you to attend the event from the comfort of your home. Admittedly, it’s not the same as actually being there, but there are some other benefits for buying a virtual ticket besides being able to virtually attend BlizzCon 2014.

Blizzard revealed the rewards for purchasing a virtual ticket and there’s definitely something for everybody. World of Warcraft players will receive the Grommloc pet, a baby murloc dressed like the one and only Grommash Hellscream, which will presumably be one of the main characters in the upcoming Warlords of Draenor expansion. Hearthstone players can look forward to an exclusive card back that can only be acquired by purchasing a virtual ticket for BlizzCon 2014. Fans of Starcraft 2 will receive multiple rewards, one of which consists of a portrait of Hierarch Artanis while another portrait is yet to be revealed. Starcraft 2 players will also be awarded with a Heroes of the Storm-themed decal. Speaking of Heroes of the Storm, purchasing a virtual ticket will earn you a Nexus Brawler portrait as well as a Nexus Charger mount to be used within in the game. Last but not least, Diablo 3 players will receive six weapon transmogrifications (one for each of the classes) inspired by World of Warcraft Warlords of Draenor.

A virtual ticket for BlizzCon 2014 costs $40 and can be purchased from here. BlizzCon 2014 will take place between November 7th and 8th in Anaheim, California. Stay tuned for more news and updates.

I’m Load The Game’s co-founder and community manager, and whenever I’m not answering questions on social media platforms, I spend my time digging up the latest news and rumors and writing them up. That’s not to say I’m all work and no fun, not at all. If my spare time allows it, I like to engage in some good old fashioned online carnage. If it’s an MMO with swords and lots of PvP, I’m most likely in it. Oh, and if you’re looking to pick a fight in Tekken or Mortal Kombat, I’ll be more than happy to assist! Connect with me by email markjudge (@) loadthegame.com only
@@MarkJudgeLTG
Previous Apple Watch put on display by French retailer Colette
Next The Witcher 3: Wild Hunt won’t “assault” you with DLC

It’s always nice to sit down and relax with a quality game. Even better when ...