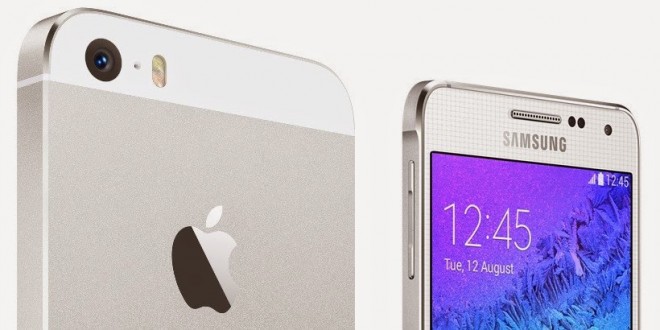 iPhone 6 Plus vs Galaxy Alpha

iPhone 6 Plus vs Samsung Galaxy Alpha

Samsung and Apple have been working hard against each other this Fall, with both companies releasing high quality handsets, as well as announcing upcoming new gadgets. Samsung has launched the Galaxy Alpha and announced a new Galaxy A line based on the premium handset, while Apple launched the iPhone 6 and iPhone 6 Plus, and announced that an Apple Watch would be landing in stores early next year. Samsung also launched the Gear S stand alone smartwatch, which is set to launch later this year, and would not require a smartphone to be tethered in order to work properly. While we are used to seeing high quality handsets from Apple, Samsung has just started noticing that customers were asking for something more premium than the Galaxy S5 and subsequently came up with the Galaxy Alpha, which has a metal frame that people are enjoying. Today, we will be comparing the specs and design of the iPhone 6 Plus and the Galaxy Alpha, to see which can be called truly premium and which should be called the better device out of the two.

The iPhone 6 Plus has a 5.5 inch Retina display with 1080p resolution and 401 ppi protected by an oleophobic coating and shatter proof glass. The iPhone 6 Plus has an aluminium unibody, slightly superior to that of the Samsung Galaxy Alpha, which only has a metal frame. ouch ID, 1 GB RAM, Apple’s new dual core A8 CPU and PowerVR GX6650 GPU with either 16, or 64 or 128 GB storage space, with no microSD card slot are the most important specs of the iPhone 6 Plus. If you are an Apple and iOS fan, the iPhone 6 Plus should clearly be your choice, since it sports Apple’s latest iOS 8 but if you are an Android enthusiast and would rather work with an Android OS and the flexibility and customizability it offers, go for the Galaxy Alpha.

Apple is known for not including a lot of customizable features in their devices, and the iPhone 6 Plus doesn’t stray from that tradition, keeping users in the Apple ecosystem as well as with “stock iOS”, so to speak. Nonetheless, Apple fans should not be bothered by this, while Android fans should tread lightly and expect to have a few weeks of “getting used to it”. The iPhone 6 Plus camera is an 8 MP rear shooter and a 1.2 MP front shooter. While the front shooter on the iPhone 6 Plus isn’t something to write home about, the rear iSight camera is known to perform surprisingly well, even in low light conditions. The iPhone 6 Plus has a 2915 mAH battery which has reported a day and half of battery life.

The Galaxy Alpha sports a 4.7 inch 720 p screen, which could have been better since the Galaxy Alpha is a pricey device, with a retail price for off-contract phones is $620. The Galaxyy Alpha will ofer you a 12 MP rear camera and a 2 MP front camera, Exynos 5 Octa-core CPU, 2 GB RAM, 32 GB internal storage, fingerprint sensor and heart rate monitor. The Galaxy Alpha certainly comes off as a high-end premium device, especially since Samsung has improved its design so much. You won’t be enjoying any waterproofing, nor a microSD card, which make the Galaxy Alpha a bit disappointing to some. Although the device offers a great design and feel in the hands, it seems that Samsung is asking just a bit too much for that metal frame. It has a 1860 mAH battery, which will probably last as much as the iPhone 6 Plus battery, since it has less pixels to power.

My life-long dream has been to test out every gadget on the market! Considering the fact that I've rapidly destroyed almost every gadget I've had so far, I'm not inclined to owning something, so my ideal outcome would be to have a different gadget each month. I'm really into smartphones, wearables and tablets and I love Playstation and Xbox, I'm sure I'll beat you at your own game (after a month of training... or two)
Previous PS4 on 1080p vs Xbox One on 900p: Screenshot comparison
Next Standalone white PS4 console will soon be available to purchase