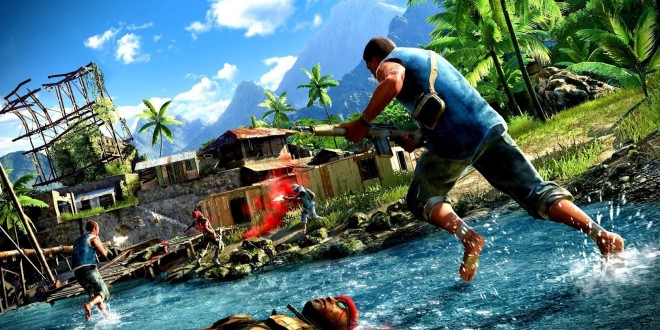 A Far Cry 4 gameplay video released by Outside Xbox unveils 9 new features that will be present in Ubisoft’s upcoming game, apart from the elephant riding and the kicking ability that were already showcased.

First of all, Far Cry 4 has a new karmic system that gamers might not like too much. It works like this: you are awarded karma points if you do good deeds, like saving hostages, but at the same time you can lose points if you do bad things. Through the video, we find out that there’s a ten point penalty for landing a quad bike on an innocent person and a fifty point penalty for setting an elephant on fire.

Another feature showcased in the clip above is being able to use beehives to your tactical advantage. While you can shoot a beehive so that the angry bees attack any nearby enemy, there’s also the possibility of getting stung yourself. Among the other stuff shown in the Far Cry 4 gameplay video, you can see that every vehicle in the game has an Autodrive feature which, once enabled, takes you to your destination while you can sit back and enjoy the scenery.

Find out more about enemies such as the demon fish or birds, and about having to make certain moral choices within the game, plus another tactical advantage you can use, by watching the video above.

Far Cry 4, Ubisoft’s upcoming action-adventure game will be released on November 18, 2014 on PC, PlayStation 3, PlayStation 4, Xbox 360 and Xbox One. This installment puts players in the shoes of Ajay Ghale, a Nepalese native returning to Kyrat in order to scatter his mother’s ashes. Once he gets back to his homeland, he finds himself in the middle of a civil war that aims to remove the despotic self-appointed king Pagan Min.

I'm a journalism graduate and an occasional gamer. As a kid I used to own a NES clone called "Terminator 2", which was hugely popular in my country. I like old school games and adventure games but I occasionaly play RPG's and Shooters as well, though I wouldn't call myself an expert at these kinds of games. When I'm not writing or playing games I prefer reading detective or fantasy novels.
Previous Halo: The Master Chief collection is now available for pre-download
Next Visceral is changing Battlefield: Hardline based on the beta feedback