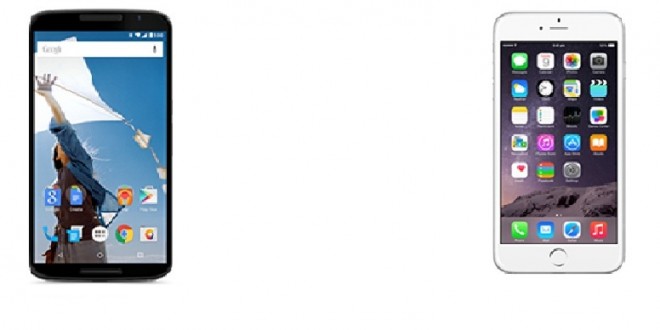 Nexus 6 vs iPhone 6 Plus - specs, design and price compared

Nexus 6 vs iPhone 6 Plus – specs, design and price compared

While you can’t buy the Nexus 6 yet, we already have a price for it, set at $650 for the 32 GB unlocked version. Google has made a significant change in how it is marketing and distributing the new Nexus 6. The Nexus 6 availability will not only include the Google Play Store this time, but you will be able to buy it from all the major U.S. carriers, including Sprint, Verizon and T-Mobile. With this move, buying the Nexus 6 has been made a bit easier for customers, not just because you will be able to walk into any carrier store and purchase it, but because carriers will also be offering the Nexus 6 with subscription plans. The Nexus 6 launch date is set for October 29 for pre-orders.

The iPhone 6 Plus launch took place on September 9, and much like the Nexus 6, Apple’s new flagship didn’t come along. The iPhone 6 Plus brought along a new iOS, too. iOS 8 was launched alongside the two new iPhone 6 versions, and while the initial release of Apple’s new mobile OS wasn’t as successful as they had hoped, subsequent updates to iOS 8 fixed most of the issues. When iOS 8 first came out, features didn’t work and the OS was filled with bugs and issues. Apple hurriedly released the iOS 8.0.1 and 8.0.2 update, which seemed to fix some things, yet make other worse. All is well now, though, because Apple has launched iOS 8.1 yesterday and the new version of iOS 8 fixes mostly everything, including the Bluetooth connectivity issues users might have had. iOS 8.1 supports the new iPhone 6, iPhone 6 Plus, iPad Air 2, iPad Mini 3 as well as the older editions of the iPhone and iPad. The iPhone 6 Plus price is $750 for the basic model, but it can go up to $950 based on storage options.

The Nexus 6 design is very similar to that of the Motorola Moto X, save for the larger footprint. The Nexus 6 frame is made of aluminium, and keeps most of the design elements you’ve seen on the Moto X. The iPhone 6 Plus, on the other hand, has an aluminium unibody and a slimmer design, which makes it a bit easier to handle than the behemoth Nexus 6. While the iPhone 6 Plus is only 7.1 mm thin, the Nexus 6 is actually 10.1 mm thick, which is quite a difference. As for their footprints, both the Nexus 6 and iPhone 6 Plus are large phones worthy of the phablet name, but the Nexus 6 is still wider and a bit taller than the iPhone 6 Plus. If you are not used to handling phablets, neither of these is for you, unless you are set on learning. The iPhone 6 Plus does have a one-handed mode, but most people don’t seem to use it because it looks strange and it doesn’t help that much. Google and Motorola didn’t even bother to put one-handed mode into the Nexus 6. The thin build of the iPhone 6 Plus did cause the whole bendgate scandal, though. While you probably won’t bend either of these devices, the iPhone 6 Plus will most likely bend easier because of its thinness.

The Nexus 6 display is a 5.96 inch AMOLED screen with a 1440*2560 resolution and 493 ppi pixel density. The iPhone 6 Plus display is a 5.5 inch LED-backlit IPS LCD screen with a 1080*1920 resolution and 401 ppi pixel density. Both these screens are undoubtedly high-quality and display all the details and colors you can imagine, as accurately as it can be done. Even so, the Nexus 6 display is bigger and has a better resolution than the iPhone 6 Plus display, although you probably won’t notice the difference unless you put the two phones side to side. The iPhone 6 Plus screen has been advertised as having a very small or no gap at all between the glass and the screen, so you might feel like you were closer to the user interface than you would on the Nexus 6.

While neither the iPhone 6 Plus or Nexus 6 have IP certification, the Nexus 6 is water resistant, which means that you won’t have to worry too much if you accidentally drop it in the toilet or get it wet in some other way.  Apple Pay, HealthKit and HomeKit are also extra features on the iPhone 6 Plus, which are missing from the Nexus 6. Nonetheless, you can find loads of alternatives to these platforms on the Google Play Store. While both the Nexus 6 and iPhone 6 Plus have NFC, that on the iPhone 6 Plus is locked to Apple Pay for now, whereas the Nexus 6 NFC is open to developers. A definite plus for the Nexus 6 is the fact that it has a microSD card slot, which has been lacking from Apple products ever since the first launch. Apple fans are a bit disconcerted by the company’s reticence to put a slot into their devices, but it seems that Apple wants its fans to use cloud services more than physical storage. Oh and the iPhone 6 Plus has a fingerprint scanner, which Google and Motorola didn’t include on the Nexus 6.

The Nexus 6 was rumored to be a powerhouse, and when it launched, it didn’t disappoint. Nexus 6 specs include the quad core Snapdragon 805 CPU clocked at 2.7 GHz, backed by 3 GB RAM and either 32 or 64 GB internal storage. You also have a battery identical to that on the Galaxy Note 4, measuring 3220 mAH, which should make for at least a day and a half of battery life. The Nexus 6 is also equipped with Motorola’s fast charging capabilities, wireless charging and will be compatible with the Motorola Turbo charger. The iPhone 6 Plus uses Apple’s own A8 chipset, backed by 1 GB RAM and either 16 GB, 64 GB or 128 GB internal storage. The iPhone 6 battery is a 2915 mAH one, which should last about as long as the Nexus 6 with mixed use. In terms of processing power, OS is a determining factor, and Android 5.0 Lollipop promises to be the best there is. While iOS 8 is quite alright so far, since it got the iOS 8.1 update, we have a feeling that in the long term, the Nexus 6 will fare better performance-wise. We will retain final judgement for when our Nexus 6 arrives and we can properly compare its performance to the iPhone 6 Plus performance.

The Nexus 6 camera has been improved compared to its predecessor, and now features a 13 MP rear shooter with dual-LED ring flash and optical image stabilization and a 2 MP front camera for your selfie needs. The iPhone 6 Plus camera is an 8 MP iSight shooter on the rear, also featuring a dual-LED flash and optical image stabilization, and a 1.2 MP sensor on the front. Since we don’t have consistent sample photos from the Nexus 6, we can’t say for sure that the camera quality is better than on the iPhone 6 Plus, but all evidence points towards it. The Moto X is known for taking great detailed photos, and we expect no less of the Nexus 6. We already know that the iPhone 6 Plus takes better photos than certain 13 MP camera-endowed smartphones, so we’d call the camera battle a tie, for now. We will get back to you on that later.

There still are some areas of the Nexus 6, such as the camera and real life performance and battery life, which haven’t been thoroughly tested yet. That means that it would be unfair to declare it the winner compared to the iPhone 6 Plus. Nonetheless, from Nexus 6 specs and hands-on reviews we’ve analyzed, we are honestly leaning toward the Nexus 6. While the iPhone 6 Plus is the perfect phablet for iOS users, the Nexus 6 will surely be the king of phablets for Android users. Which do you think will fare better in the long run?

My life-long dream has been to test out every gadget on the market! Considering the fact that I've rapidly destroyed almost every gadget I've had so far, I'm not inclined to owning something, so my ideal outcome would be to have a different gadget each month. I'm really into smartphones, wearables and tablets and I love Playstation and Xbox, I'm sure I'll beat you at your own game (after a month of training... or two)
Previous Insomniac’s Sunset Overdrive gets a launch trailer
Next Samurai Warriors 4 is out now on PS4, PS3 and PS Vita