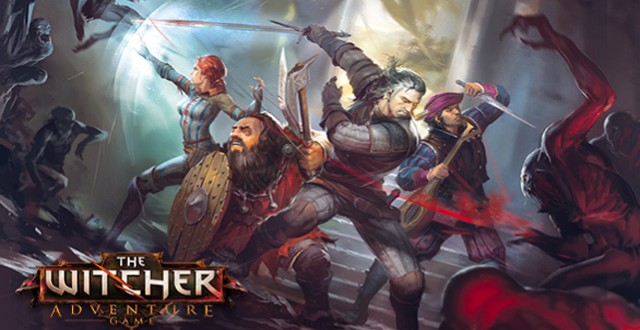 The Witcher 3: Wild Hunt is still a few months away, but you can start preparing for the monster-slaying action right now with The Witcher Adventure Game. Earlier today, CD Projekt RED launched this title in both digital and board game formats and you might wanna take a look at it as it allows you for the first time to play as some of the other characters from the Witcher universe. You’ll naturally still be able to play as our hero Geralt of Rivia, but in addition you can also play as Triss Merigold, Yarpen Zigrin, or Dandelion. This title is quite different than the RPG series as suggested by the fact that there is also a board game version of it.

The digital version is faithful to the board game and features the very same “choose your own adventure” gameplay. To help you with this endeavor will be 288 cards, 30 monsters and the unique abilities of the character you choose to play as. The Witcher Adventure Game will allow you to play alone or with friends as the game features both single player and multiplayer modes, including co-op. Last but not last, you can expect the same quality story telling and writing we’re already familiar with from CD Projekt RED. The Witcher Adventure Game is certain to hype you up even more for the Witcher 3, although I’ll admit that a digital board doesn’t sound nearly as interesting as an open-world RPG. Still, it’s worth taking a look at, and you can do it here.

Despite the fact that The Witcher Adventure Game was just released, you can already buy it at a 10% discount (thanks to Black Friday no doubt) from both Steam and GOG until December 4th. This brings the price down to just 9 bucks but you can get it even cheaper than that if you’ve participated in the beta testing phase. The Witcher Adventure Game beta participants can buy the game from GOG at 40% off until December 27th. The game is available on Windows, MAC, Android, and iOS.

I’m Load The Game’s co-founder and community manager, and whenever I’m not answering questions on social media platforms, I spend my time digging up the latest news and rumors and writing them up. That’s not to say I’m all work and no fun, not at all. If my spare time allows it, I like to engage in some good old fashioned online carnage. If it’s an MMO with swords and lots of PvP, I’m most likely in it. Oh, and if you’re looking to pick a fight in Tekken or Mortal Kombat, I’ll be more than happy to assist! Connect with me by email markjudge (@) loadthegame.com only
@@MarkJudgeLTG
Previous Linshof i8 is an octa-core German flagship with 80GB of internal storage
Next Telltale’s Game of Thrones Release Dates Announced