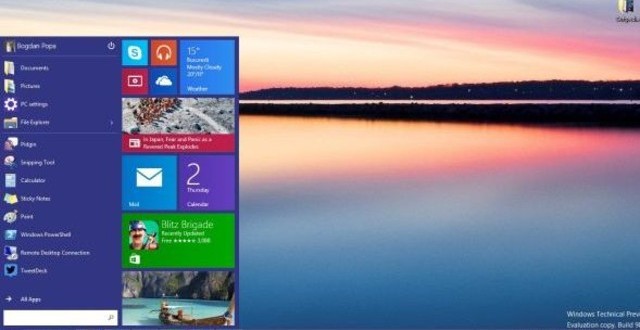 Microsoft is planning to reward users who are part of the Windows 10 Insider Program by allowing them to upgrade to the final build when it releases next year. While this is not 100% guaranteed to happen, Microsoft’s Gabriel Aul confirmed that this is indeed their “intent” at the moment. The statement Aul made on Twitter recently sounds very promising, but at the same time, suggests that the decision is not necessarily final and Microsoft might still be thinking about it. The RTM (release to manufacturing) build aka the final build of Windows 10 is scheduled to launch either in late Summer or early Fall of 2015.

As for the possibility of upgrading from the technical preview build to RTM, word on the street is that Microsoft will allow users to do it free of charge. This may end up just being wishful thinking, but on the other hand, it would make sense to reward the people who took the time to test the preview and provide valuable feedback to Microsoft. However, there are some even stranger rumors floating around and they are saying that Windows 10 might be available as a free update to those who own Windows 7 or Windows 8.1. The previous version of Windows was only available to those who paid for it and ended up being a disappointment for more than a few people. By offering Windows 10 for free to those who own the previous versions Microsoft is presumably trying to bring more users to their side and regain the trust of those who were disappointed in the past. But again, these are just rumors for now, so make sure you take them with a grain of salt.

On a related note, the company is said to be hosting another press event this January to talk more about Windows 10. Microsoft will reportedly announce the consumer preview of the operating system at this upcoming event. This upcoming preview will be very different than the technical one as it will be focused more on the new features and less on the inner workings of the OS.

I’m Load The Game’s co-founder and community manager, and whenever I’m not answering questions on social media platforms, I spend my time digging up the latest news and rumors and writing them up. That’s not to say I’m all work and no fun, not at all. If my spare time allows it, I like to engage in some good old fashioned online carnage. If it’s an MMO with swords and lots of PvP, I’m most likely in it. Oh, and if you’re looking to pick a fight in Tekken or Mortal Kombat, I’ll be more than happy to assist! Connect with me by email markjudge (@) loadthegame.com only
@@MarkJudgeLTG
Previous New Dragon Age Inquisition patch is not coming to Xbox One just yet
Next New Tekken 7 character not releasing in the US in response to fan criticism