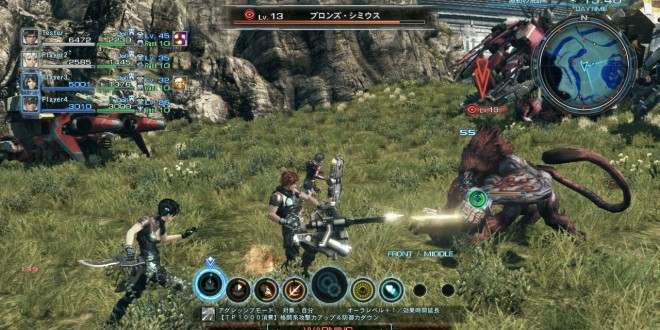 Over Twitter, Takahashi revealed that artist Yoko Tsukamoto, who has illustrated for games such as Half-Minute Hero, Lord of Vermilion, and the first Xenoblade, is working on the project. Takahashi stated: “Today, I present Ms. Yoko Tsukamoto. I believe that by hearing her name, you’ll understand that the Xenoblade Chronicles X world isn’t built only upon sci-fi elements.” Along with Tsukamoto, Takahashi revealed that illustrator Takashi Kojo, whose resume includes Gravity Rush and Sol Trigger, is a part of the project. Takahashi had this to say: “Then there’s Mr. Takashi Kojo. His solemn landscapes are fantastic, but this time around I’ve mainly put him in charge of enemy designs. His designs for large enemies are particularly great, and the strongest unique enemy [in the game] is also his creation. The Growth Soldiers which you”ll probably see the most throughout the game (and crush, lol) were also designed by him.”

A sci-fi tale, Xenoblade Chronicles takes place in the year 2054. Two alien races engage in battle near the Earth, causing severe damage to the planet. As Earth continues to quickly become inhabitable, a joint government launches the Earth Species Pan Immigration Program, forcing humanity to evacuate the planet in enormous ark ships. The story follows the passengers of an American ship, the White Whale, as it crashes on the planet Mira. The passengers begin to establish a new home, all while being hunted by an alien race.

I’m Load The Game’s co-founder and community manager, and whenever I’m not answering questions on social media platforms, I spend my time digging up the latest news and rumors and writing them up. That’s not to say I’m all work and no fun, not at all. If my spare time allows it, I like to engage in some good old fashioned online carnage. If it’s an MMO with swords and lots of PvP, I’m most likely in it. Oh, and if you’re looking to pick a fight in Tekken or Mortal Kombat, I’ll be more than happy to assist! Connect with me by email markjudge (@) loadthegame.com only
@@MarkJudgeLTG
Previous Final Fantasy X/X-2 Confirmed for PS4
Next The Crew PS4 Giveaway – Grab a free copy of Ubisoft’s newest racing game