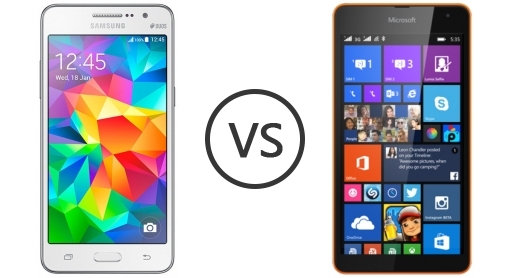 The Microsoft Lumia 535 and the Samsung Galaxy Grand Prime are two mid-range, affordable devices that go head-to-head in this comparison.

Tech enthusiasts always like to talk about the best possible smartphones available on the market, but for a lot of people out there most of these devices seem prohibitively expensive. But while flagships like the iPhone 6 and Samsung Galaxy Note 4 would cost you quite a pretty penny to purchase, there are other offerings out there that can be bought for a much lower price. The Microsoft Lumia 535 and the Samsung Galaxy Grand Prime are two such smartphones. Each of these handsets comes equipped with mid-range specs and prices to match, which means that they are both worth taking a look at if you were planning to buy a new phone. But which one is better, the Microsoft Lumia 535 or the Samsung Galaxy Grand Prime? Let’s find out.

As you may have already be aware by now, Microsoft purchased Nokia’s mobile division earlier this year and decided to slap their own name on all upcoming Lumia phones. The Microsoft Lumia 535 came out earlier this month and is the first device to feature the new brand. This mid-range device comes equipped with a Corning Gorilla Glass 3 protected 5-inch panel with 540 x 960 resolution and 220 pixel density. A quick peak under the hood reveals a Qualcomm Snapdragon 200 quad-core processor processor clocked at 1.2 GHz, with Adreno 302 GPU, and 1 GB of RAM. The Microsoft Lumia 535 also offers 8 GB of internal storage memory, a 5MP primary camera on the back along with another 5MP selfie shooter on the front, and a 1905 mAh battery. Unsurprisingly, you’ll find that the Lumia 535 runs on the Windows Phone 8.1 operating system. As for the price, you’re looking at a real bargain here as the device will only set you back about $150.

The Samsung Galaxy family includes incredibly good devices like the Galaxy S5 or Galaxy Note 4. However, there is a also a mid-range smartphone among them and it goes by the name of Samsung Galaxy Grand Prime. Similar to its competitor, the device sports a 5-inch display with 540 x 960 pixel resolution and 220 ppi. No Gorilla Glass 3 protection though. One the other hand, the Samsung Galaxy Grand Prime offers a newer processor in the form of the Qualcomm Snapdragon 410 chipset with quad-core @ 1.2 CPU, Adreno 306 GPU, and 1 GB of RAM. We’re again only looking at 8 GB of internal memory, although this time around there is also a microSD card slot available that’s good for up to 64 GB of additional storage. Rounding up the specs are the 8 MP primary shooter, the 5 MP front-facing camera, and the 2600 mAh battery. The Samsung Galaxy Grand Prime runs on the Android 4.4.2 KitKat operating system and is priced at around $240.

On one hand, you have the Microsoft Lumia 535, a mid-range smartphone that comes with decent enough specs and a price tag that’s very hard to argue with. But on the other hand, there’s the Samsung Galaxy Grand Prime, an overall more powerful device that costs almost 100 bucks more than its competitor. In other words, we’re looking at a classic scenario of price vs power. That said, the Samsung Galaxy Grand Prime was primarily intended for India and other developing market and you may have a difficult time finding one in the US or Europe. The Microsoft Lumia 535 was also mainly targeted at those markets, although it made it pretty soon to the US and Europe as well and now there are plenty of stores which can offer it. The Samsung Galaxy Grand Prime looks to be the better device in my opinion, but if you’re short on cash, the Microsoft Lumia 535 is definitely a solid choice as well. The final decision, as always, is entirely up to you.

I’m Load The Game’s co-founder and community manager, and whenever I’m not answering questions on social media platforms, I spend my time digging up the latest news and rumors and writing them up. That’s not to say I’m all work and no fun, not at all. If my spare time allows it, I like to engage in some good old fashioned online carnage. If it’s an MMO with swords and lots of PvP, I’m most likely in it. Oh, and if you’re looking to pick a fight in Tekken or Mortal Kombat, I’ll be more than happy to assist! Connect with me by email markjudge (@) loadthegame.com only
@@MarkJudgeLTG
Previous New Street Fighter V Character Revealed
Next Sony Xperia Z3 vs OnePlus One – Killer flagship vs Flagship killer

There are a million articles covering various flagship phones, their pros and cons, prices and ...