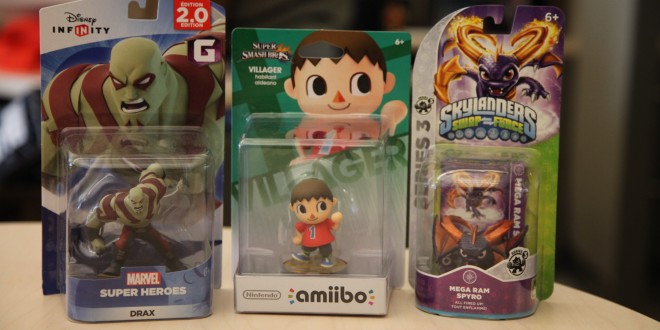 A comparison between amiibo, Skylanders and Disney Infinity figures

Amiibo vs Skylanders vs Infinity: A Comparison

Recently we saw the release of Nintendo’s line of interactive toys, the Amiibo. These are not the first “Toys to Life” figures to see release. For a few years now, we have had the Skylanders series, which introduced the concept with Skylanders: Spyro’s Adventures. There is also the Disney Infinity series, which entered the genre in 2013. Since, then, the toys have become incredibly popular with collectors, with figures going for extreme amounts on secondhand markets. While the figures do function similarly, each has its own appeal and differences that separate them.

The newest of the bunch, Amiibo are Nintendo’s line of figures. With the third batch coming in a few weeks, Amiibo are all based on well known Nintendo characters, such as Mario and Link. While the figures do look good (for the price), Amiibo have one thing separating them from the rest of the “Toys to Life” figures: they work with more than one series. Though the main appeal at the moment is the new Smash Bros. games for the Wii U and 3DS, the figures are compatible with multiple games. Titles that Amiibo work with include Mario Kart 8, Hyrule Warriors, Kirby and the Rainbow Curse, and Yoshi’s Wooly World. Unfortunately, this is also one of Amiibo’s biggest weaknesses; in most of these games, the figures do little more than unlock costumes or weapons. If Nintendo can enable more games to use Amiibo the way that Super Smash Bros. does, then Nintendo’s line of figures probably have the most potential out of all of the series here.

Originally released in 2013, Disney Infinity saw the release of its second set, Marvel Super Heroes, in September 2014. All of the figures are based off of Disney franchises, which is one of the main appeals for this series. Since Disney is so popular, fans young and old can enjoy these figures that are based off of franchises that have been loved for decades. There is also a wide variety of characters to choose from, including The Incredibles, Cars, Toy Story, Frozen, and The Nightmare Before Christmas. The second set took things farther by introducing more than just more popular franchises such as Peter Pan and Aladdin, but also Marvel characters, such as Spider-Man and the Avengers. Disney Infinity does have one feature that the other lines of figures don’t have: a creation mode. Players can create their own worlds using items unlocked in the game’s playable worlds, and on special discs that gamers can purchase alongside the figures. This can help expand the games themselves a lot. While Infinity has an incredibly large selection of figures, however, the game also has the least amount of software. If Disney can continue to make use of its expansive selection of characters (Star Wars, anybody?) and put out more quality software, then the series has a bright future.

Released in 2011, the Skylanders series was the first major series to introduce the “Toys to Life” concept. Since then, 3 more entries to the series have been released, with each one having a new theme. This variety is the Skylanders series’ biggest strength, with each theme bringing something vastly different each release. The second game introduced the Giants, which were larger than the normal figures. The third game introduced the “Swap Force” figures, which had the ability to switch top and bottom halves. The latest game in the series brought the “Trap Master Skylanders,” which were able to capture enemies within the game, and allows players to use them as playable characters. Compared to the Amiibo and Disney Infinity franchises, however, Skylanders requires the most investment. This is especially true for Trap Team. Completionists will have to collect a large number of the figures to see everything the game has to offer, including multiple crystals for trapping enemies. This can be a financial nightmare for parents. But overall, Skylanders has great figures, variety, and gameplay. Just be ready to invest deeply into the series.

I’m Load The Game’s co-founder and community manager, and whenever I’m not answering questions on social media platforms, I spend my time digging up the latest news and rumors and writing them up. That’s not to say I’m all work and no fun, not at all. If my spare time allows it, I like to engage in some good old fashioned online carnage. If it’s an MMO with swords and lots of PvP, I’m most likely in it. Oh, and if you’re looking to pick a fight in Tekken or Mortal Kombat, I’ll be more than happy to assist! Connect with me by email markjudge (@) loadthegame.com only
@@MarkJudgeLTG
Previous Xiaomi Mi5 release date, metal frame, QHD display confirmed
Next Mass Effect 4’s rumored 2020 release date is false