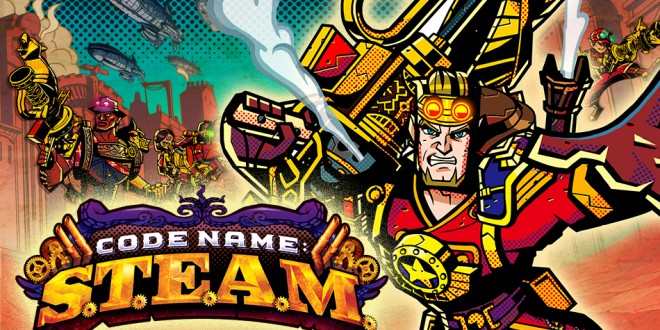 Codename S.T.E.A.M is a new IP launching for the Nintendo 3DS on March 13th that was announced back at the developers round table at e3 2014. The game is a turn based strategy RPG that has third person shooter elements a la Valkyria Chronicles and is set in a steampunk inspired London. Developed by Intelligent Designs (Fire Emblem Awakening) the premise of Code Name: S.T.E.A.M follows the tribulations of an elite fighting force formed by Abraham Lincoln to battle invading aliens from other worlds.

The camera lives on the battlefield where it follows the units from a third person perspective rather than the usual top down view familiar in other Strategy RPGs. Vertically is of extreme importance as you need to use the environment to your advantage. Actions are determined by the amount of steam that you have in your steam tank, so you have to plan accordingly to make sure that you have enough steam to be able to move, attack, and defend your character.

Nintendo announced that players will be able to unlock playable Fire Emblem characters through certain amiibo figures. Marth, Ike, Robin, and Lucina will all be fully playable by simply touching their corresponding amiibo to the New 3DS XL’s bottom screen, or by purchasing the upcoming add on Near-Field Communications device for the older 3DS models. It will be the first game that actually brings the toys to life as Smash Bros. and Mario Kart solely use them as in-game items or as personal trainers. What’s even more interesting is that if a Fire Emblem amiibo character were to fall in battle then they are then unable to be revived in-game until the player touches the figure to the NFC reader again. This concept stays true to the spirit of permanent death experienced and loved in the Fire Emblem series.

As a side note Nintendo also announced that if you preorder Codename S.T.E.A.M. from GameStop, you will receive a small Majora’s Mask pendant as a preorder incentive as long as supplies last.

Hi I'm Daniel and I'm an aspiring writer, avid gamer, and wanna-be cook; I'm not quite certain in which order. I like all things RPG and if that means swords n' spells, all the better. But, provided it has a good story I'll probably want to try it regardless of what it is. I'm a Windows junkie, and I spend my time gaming on Xbox, PC, and my 2DS.
@@danielcooper179
Previous iPad Air battery life short review
Next Resident Evil Revelations 2: Barry’s Episode Gameplay Preview