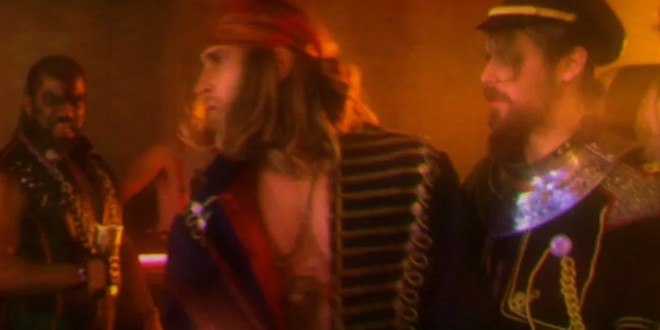 This Spoof Trailer For “The Order: 1986” Is Incredibly Fun, Dude

All the marketing we’ve seen for the upcoming PlayStation 4 exclusive, The Order: 1886 has been rather one-note, and remarkably grim. While not official, this trailer will probably attract way more eyeballs than anything Sony’s been able to come up with. The video, called The Order 1986, was put together by the guys at Corridor Digital. These are the folks who made the rather fun live action trailer for Middle Earth: Shadow of Mordor.

The video kicks off with a film crew recording a live performance of “Werewolf Slayer” by a band called… well, The Order. There’s a werewolf howl, a bitchin’ guitar riff, and some gloriously colorful 80’s filters and radical hair.

Out of nowhere, a werewolf (that looks suspiciously like Street Fighter’s Blanka) appears and makes quick work of an extra. The director yells cut, but the werewolf is having none of it, and turns on cast and crew. Naturally, the four members of The Order leap into action. Gatling guns are fired, Luger’s are shot, and a guitar comes in handy as a makeshift weapon. Right then, the video cuts to a couple of creative types pitching the scene we just described to a pair of suits. At that point, they learn the game is actually called “The Order: 1886.” No matter, they follow up by pitching a Matrix-inspired short called The Order: 1996 It’s all very meta.

If you just want to listen to Werewolf Slayer, you can download the song right here, or play it on endless loop on YouTube, just like me.

The Order: 1886 is a PS4 exclusive game developed by California based studio, Ready at Dawn. It features a special group of four knights, members of a group known as The Order, waging an endless battle against an ancient and deadly foe. Set in a steampunk-inspired alternative version of Victorian-era London, “The Order: 1886” is slated for release on Feb. 20, 2015.

Hardcore gamer by day, comic book writer and professional heavy sleeper by night. I love videogames and I'll try almost any genre once. Unless it requires lots of time and effort, then I'll probably zone out. I started on the NES and cherish those early Nintendo memories, but I tend to call PlayStation platforms home now. Also, Star Trek TNG rules.
@@shobocoker
Previous Here’s The First Trailer For Dark Souls 2: Scholar Of The First Sin
Next New Senran Kagura Trailer Released