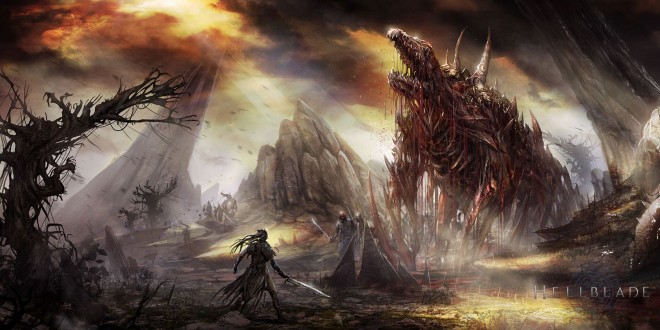 Not much is yet known about Ninja Theory’s latest project Hellblade. Most information comes from a dev diary released last month covering environments, enemy design, and combat. Even after the recent staff departures at Ninja Theory, however, it can be said that work on Hellblade is still moving steadily along. A closer look at the game was released today through an interview with developer Dominic Matthews on PlayStation Access.

According to Matthews, the combat system in Hellblade will be skill-based and will encourage experimentation and exploration in combining moves and abilities- that’s a familiar Ninja Theory style from the Devil May Cry series. Inspiration has been drawn from one-on-one fighter games. There will be a lot of tactics involved. To make every battle feel close and intimate, an over-the-shoulder camera angle is being utilized and most battles will be against one to three enemies at a time. Matthews stressed that the team wants Hellblade to have a “super technical” feel, as with a one-on-one fighter.

Hellblade will also feature a lot more exploration than previous games, but will not be entirely open world. The player can’t simply walk from one end of the map to another, for example. Areas will be reached as the game progresses, but it’s implied that there will be plenty to look at within those areas. Matthews was more closed-lipped about the world and map of Hellblade, merely saying that players can “expect the world to be quite dynamic and have a lot of movement and to feel alive.”

Matthew also reemphasized the project’s commitment to creating a unique and engaging experience, from the main character Senua, to the different types of enemies, and even down to the soundtrack of the game itself.  He wants it to be a game where “if you look at a single screenshot, you know that it’s Hellblade.”

Hellblade follows a woman named Senua who is embarking upon a personal journey through a world based around Celtic myth and folklore. It will be released on PlayStation 4 and PC.

Emma is an aspiring something-or-other with a love for video games fostered since childhood. She is more prone to rage-quits than she would like to admit. In her spare time, she runs her own blog and writes creatively.
@back_Paq_ing
Previous Elite: Dangerous 1.1 Update Launches Today
Next Cities Skylines is Paradox’s newest title

In a new post on the PlayStation blog, Dominic Matthews from Ninja Theory gave some insight ...